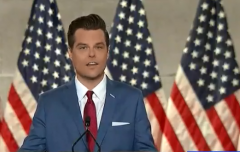 (CNSNews.com) - The choice in the upcoming election is one of "strength or weakness; energy or confusion; success or failure," Rep. Matt Gaetz (R-Fla.) told the Republican National Convention Monday night.

"We must fight to save America now or we may lose her forever. Joe Biden might not even notice."

Gaetz said the "woke-topians" -- Rep. Alexandria Ocasio-Cortez and her fellow socialists -- will settle for Biden, "because they will make him an extra in a movie written produced and directed by others. It's a horror film, really,” he said:

They'll disarm you, empty the prisons, lock you in your home, and invite MS-13 to live next door. And the police aren't coming when you call. In Democrat-run cities they're already being defunded disbanded. Blaming our best and allowing society's worst?

That's the story they write in Hollywood -- that's if the lights even stay on in California any more. A state that cannot keep power running for its own people should not send its junior senator to be vice president.

They used to write, only in fiction. But nightmares are becoming real. Cops killed, children shot. At the Democrat convention, they say, if you vote against Trump it will all stop. Appeasement is never a winning strategy.