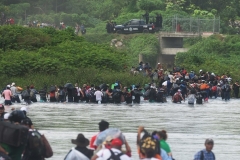 A caravan of would-be illegal immigrants heads to the USA in November 2018. New ones are forming as Democrats prepare to take control of the entire government. (Photo by MARVIN RECINOS/AFP via Getty Images)

They want to digitally erase us online, pursue us in the flesh, make us unemployable and make it difficult for conservatives to be able to assemble and share ideas.

I'm deeply troubled at the initial plans we're seeing from the Biden administration. They want to shut down America's businesses but open up the borders. They want to close the Keystone pipeline, opening opportunity for Russia and some of America's adversaries.

And then they want to take the treasure of America's people and they want to spread it around the world through the Paris Climate Accord and America last organizations like the U.N. and the World Health Organization. That won't benefit American prosperity and success.

And, Sean, listening to -- you talk about these things, it's hard to think it's anything other than abjectly depressing, not just like tear-rolling-down-the-side-of-the-cheek depressing, but draw-the-warm-bath-and-get-the-sharp-blade depressing.

Looking ahead to the 2022 election, Sean Hannity opined that Democrats can be defeated "when they run against liberty freedom, freedom of speech, the First Amendment. Not sure that's going to work," he said.

"Well, the only way we're going to beat them at the ballot box is if we fix the problems at the mailbox," Gaetz said.

"And we're going to need to see courage emerge from the several states and from legislatures. We'll need states like Florida and Texas to lead the way with innovative examples and certainly a defense of freedom that we don't expect from the incoming Biden administration.

"I hope America is successful over the next four years, but the agenda we're seeing is not one that puts our country and our people first."