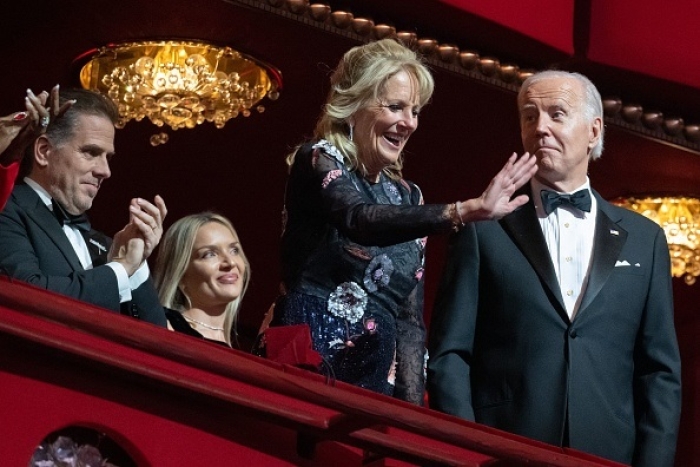 "He's definitely the Grinch that stole Christmas for the Democrat National Committee. And what he's showing here is evidence that the Biden campaign colluded with Big Tech to suppress a story that we now know is 100 percent true,” Comer told Maria Bartiromo.

"The problem the Democrats should have is, why were they so scared of the laptop story? And the answer, Maria, is because the laptop proves evidence that not only did Joe Biden lie to the American people about his involvement with his family's influence peddling and shady business dealings.

"It also proves that Joe Biden was a part of those shady business deals. And that's something every American should be concerned about."

Comer was referring to Musk's release on Friday of the so-called "Twitter Files," messages that show how politically-connected people petitioned Twitter to "manipulate speech" and ban information they didn't like, such as the Hunter Biden laptop story, which Twitter actively suppressed in the run-up to the 2020 election.

According to journalist Matt Taibbi, to whom Elon Musk released the information:

-- "By 2020, requests from connected actors to delete tweets were routine," we are told. "One executive would write to another: 'More to review from the Biden team.' The reply would come back: 'Handled.'"

-- "Because Twitter was and is overwhelmingly staffed by people of one political orientation, there were more channels, more ways to complain, open to the left (well, Democrats) than the right."

Comer says the committee he soon will lead plans to investigate the Biden family's alleged influence-peddling and how it may have influenced Joe Biden's policies toward China and others.

"Joe Biden met with every person that he earlier said he never met," Comer said.

"We have pictures. We have e-mails to prove it. Joe Biden was actively involved. What the Biden family was doing was selling access to Joe Biden. That's the family business.

"And that's what I have been focused on, the threat of communist China."

"And when you look at national security, and you look at the evidence on the laptop, energy policy is national security. And the most concerning part of the business deal, so to say, so to speak, that the Biden family was involved in was trying to help China get their foot in the door on the American energy industry.

"So, part of what the deal was that Joe Biden was going to be involved in was trying to help China purchase drillers in the natural gas industry. People are outraged over China buying farmland in the Dakotas. Think about China buying into our American energy industry, at the help of the Biden family.

"And then you look at all these crazy policies coming out of the Biden administration with respect to energy policy that are affecting every American in a negative way, and you think maybe he is compromised."

Comer said he's "pretty confident" that a number of federal employees were communicating with Twitter, "as to what they can censor and not, as to who they can ban and who they cannot."

Comer said his committee will do "everything we can to get to the truth."

"We believe that Elon Musk has a lot of evidence. Part of what I have said when I took over the Oversight Committee is, we're going to base everything on evidence, unlike Adam Schiff. We're not just going to be on fishing expeditions. When we go down a certain path, it's because we have credible evidence.

"And what Elon Musk is doing for the American people and for Republican oversight is that he's providing evidence."