Rep. Byron Donalds: 'The President Has No Authority to Void Contracts in the United States' 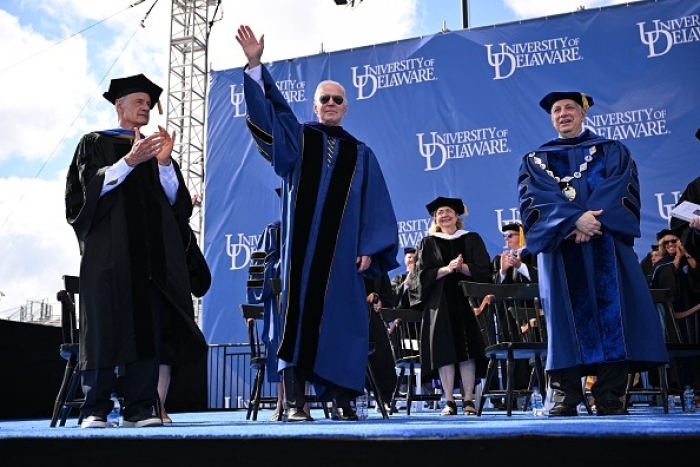 President Joe Biden speaks at the graduation ceremony for his alma mater, the University of Delaware, on May 28, 2022. (Photo by MANDEL NGAN/AFP via Getty Images)

(CNSNews.com) - President Biden has extended the COVID-era pause on student loan payments through August 31, but some Democrats want him to go much further by canceling student loan debt.

But why should taxpayers pick up the tab?

"The universities aren't going to go back and pay back some of these debts, because the second you graduate, they're busy calling you to get a donation. That's number one.

"Number three -- and this is the one that's more important than anything else -- this creates a significant moral hazard in our country. When has it ever been OK for our president randomly to say that contracts - - that contract law, binding contracts are now -- are no longer valid, that they are null and void, simply because he chooses to?

"Listen, I know people are struggling with student loan debt, especially if you got a degree from a university and you're not working in that field today as an adult. That's a terrible situation to be in. But the president has no authority to void contracts in the United States.

"That is a complete violation and a destruction of the rule of law. He doesn't have this authority. I don't care how bad his polling numbers suck. He can't do this. He shouldn't do this."

According to CNN, "Top White House aides have drafted the order for canceling some student loan debt, but they're still waiting for President Joe Biden to make up his mind on whether to go forward with it."

"A decision hasn’t been made yet," White House spokeswoman Karine Jean-Pierre told reporters on May 18, the same day Biden met with Sen. Raphael Warnock (D-Ga.) at the White House.

Warnock called it a "productive" meeting: "[A]nd I hope the President is thinking about Georgians and our stories as the administration plans its next actions to address burdensome student loan debt.”

Rep. Ayanna Pressley (D-Mass.) tweeted on Monday: "Student debt cancellation is a racial & economic justice issue and my colleagues on @TheBlackCaucus understand the urgency of the moment. @POTUS must #CancelStudentDebt to help reduce the racial wealth gap and advance a just & equitable recovery for all."

But many Republicans oppose the move:

"Why should a waitress who didn't attend college pay the student loan debt of a lawyer making $300,000?" Sen. Tom Cotton (R-Ark.) recently tweeted: "This is exactly what will happen under Biden's student loan transfer plan."

"It makes no sense for the Biden Administration to cancel nearly $2 trillion in student loan debt," Romney said:

"This decision would not only be unfair to those who already repaid their loans or decided to pursue alternative education paths, but it would be wildly inflationary at a time of already historic inflation.

"Democrats and Republicans alike have called on the President to not take this unwise step and pile more onto our $30 trillion national debt. And while the President’s legal authority in forgiving this debt is dubious at best, our bill would ensure that he would be prevented from taking action."

President Biden joked about tuition costs while giving the commencement address at the University of Delaware on Saturday:

“And to all the parents up in the stands, this may be the best day of all.  No more tuition!” he said. “But probably all of them are going to graduate school, so that probably won’t work."