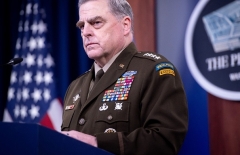 US Army General Mark Milley, chairman of the Joint Chiefs of Staff, holds a press briefing about the US military drawdown in Afghanistan on September 1, 2021. (Photo by SAUL LOEB/AFP via Getty Images)

The book says Milley and others were worried about Trump's stability after his election loss:

“And he needs to be asked, did you call the Chinese government in defiance to your command? Did you warn them or insinuate to them that the president might attack them? That's incredibly dangerous to the country, to the world. And if true, treasonous."

Paul said if this happened, Milley should be immediately relieved of his duties and court martialed.

"You have to find out if it's true. This is innuendo and rumor and propaganda, perhaps, but if it is true, absolutely immediately needs to be removed.

"We have elections. We can't have generals overturning elections. We have always criticized in authoritarian regimes where the military takes over. This is very, very dangerous, and if this happened, Milley needs to be immediately removed of his command."

"If you're calling up our adversaries and saying we think the president is such a loose cannon, that he might bomb you, that actually puts them on red alert and actually if there happens to be, which there are instances where there are false warnings of attacks and we have to talk to each other.

"If we have a general calling China and saying our president is liable to unleash nuclear weapons on you, or unleash an attack on you, that makes any kind of accidental war even more likely by him ginning up the game. It's a terrible thing, very dangerous, but just by defying the chain of command it gets outside of what we have as a constitutional republic."

According to The New York Times, which received an advance copy of the book that is due out next Tuesday, General Milley told a concerned House Speaker Nancy Pelosi, "I want you  to know this in your heart of hearts, I can guarantee you 110 percent that the military, use of military power, whether it’s nuclear or a strike in a foreign country of any kind, we’re not going to do anything illegal or crazy."

"The best I can do is give you my word, and I’m going to prevent anything like that in the United States military,” Milley is quoted as saying.

After speaking to Ms. Pelosi, General Milley convened a meeting in a war room at the Pentagon with the military’s top commanders, telling them that he wanted to go over the longstanding procedures for launching a nuclear weapon. The general reminded the commanders that only the president could order such a strike and that General Milley needed to be directly involved.

The general added: “The strict procedures are explicitly designed to avoid inadvertent mistakes or accident or nefarious, unintentional, illegal, immoral, unethical launching of the world’s most dangerous weapons.”

Then, he went around the room and asked each officer to confirm that they understood what he was saying.