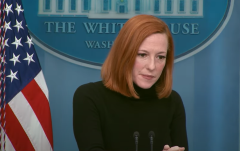 (CNSNews.com) - By definition, criminals break the law, but at the White House on Monday, Biden spokeswoman Jen Psaki said, "in order to reduce and change the direction of crime and gun crime, which is the majority of crime, we need to change -- we need to have more laws in place."

A reporter noted that crime, including mass shootings, is rising: "What does the president believe is causing such a callous disregard for human life in this country?" he asked Psaki:

"Well, let me first say, and thank you for the question, these shootings are horrific and must stop," Psaki said:

"Our prayers are with the survivors, those who are lost, and their families. I can't attribute, obviously, this -- this (a shooting in Pittsburgh) just happened over the weekend, the reasoning.

"But what I can tell you is that it's a reminder of the need to take more steps to stop gun crime, something the president has strongly supported and advocated for since -- for decades in public office -- cracking down on gun traffickers, putting more cops on the beat, investing in community anti-crime programs. And -- and, of course, also confirming a very qualified individual, Steve Dettelbach to -- to lead the ATF.

The reporter asked Psaki, "Aside from laws, you know, what does the president have in mind, if anything, a plan to...get people to respect life more, to respect other human beings. Laws aside, you can't legislate the morality and values and human life. Does he have -- does he ever talk about that openly to you or anyone else?"

Psaki responded, "I think every time that you've seen the president talk about shootings, the impact on families, on human beings, on loved ones, on communities, he talks about that human impact.

"And -- but it also is true that in order to reduce and change the direction of crime and gun crime, which is the majority of crime, we need to change -- we need to have more laws in place."

President Biden, a gun control advocate, is urging Congress to pass another semi-automatic weapons ban and to repeal the law that prevents gun manufacturers from being sued into bankruptcy.