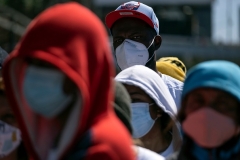 (CNSNews.com) - There is no cap on the number of foreign children who will be allowed into this country, a White House spokesman indicated on Wednesday:

"Our policy continues to be, we are not going to send a 10-year-old back across the border," Jen Psaki said.

A reporter asked Psaki: "So is there a limit or a cap to the number of unaccompanied minors that are going to be allowed into the U.S.?"

"A limit or a cap?" Psaki repeated. "So should we send some kids who are 10 back at a certain point -- is that what you are asking me?"

"I'm just asking you what the Biden administration's policy is," the reporter responded. "Is there a limit to the number of children that will be allowed in? I mean the numbers we are hearing now 565 on average every day. I am just curious what the endgame is here. How many ultimately would be allowed in?"

Well, I think where--where we are, is we are focused on some of the very specific numbers. So when we came into office there existed about 13,000 permanent beds in HHS or permanent influx shelter system facilities during the last administration.

Thousands of these beds, approximately half, were taken off-line due to COVID. Staffing was also reduced to put it on par with the new reduced capacity. This was sufficient for the prior--prior administration. This is how we got here, because they were expelling children in addition to families and single adults.

We decided, as you all know, that we will be more humane about how we approach this. There was an operational capacity built. The prior administration also did not consider that there were other mitigation efforts like masking and improve(d) ventilation, co-horting, and other measures that would contain the spread of COVID-19. There is now a revised CDC guidance which means there's greater capacity in these facilities where we can expedite children, expedite getting children into them.

There are--we are taking steps to ensure that when kids come to the border, we look and see if they have a phone number in their pocket so we can call the family member and get them to those family members as quickly as possible. These are the steps that we are taking at this point in time.

Our policy continues to be, we are not going to send a 10-year-old back across the border. That was the policy of the last administration. That's not our policy here.

The reporter asked Psaki if the Biden administration is unintentionally "incentivizing parents to send their children across the border alone because that is their best chance to enter and stay in the United States?"

"Well, certainly you have heard the President say in this interview that he conducted (with ABC News; see below) that he is encouraging people not to come. Now is not the time to come. This is not a safe journey for people to take of any age, and he believes, as he talked about last night, that no parent is looking and just trying to make a bet on whether their kid can kind of make it. This is a very difficult and treacherous journey.

“Most of these kids are fleeing very challenging circumstances, and his view is that there is a number of steps we need to take and steps that he hopes he can work with Democrats and Republicans on. So that's his goal.”

Psaki on Wednesday insisted again that "the border is not open" and "the vast majority of people will be certainly sent back on their journey. And that's the message we're sending."

'Most of 'em are not little babies'

President Biden told ABC's George Stephanopoulos on Tuesday he's trying to "get control of the mess that was inherited."

He rejected the idea that illegal immigration has skyrocketed because foreigners think Biden is a nice guy. They're trying to escape poor living conditions in their home countries, Biden insisted.

“The adults are being sent back, number one. That's number one. Number two, what do you do with an unaccompanied child that comes to the border? Do you repeat what Trump did?” Biden asked:

Take them from their mothers, move them away, hold them in cells, etcetera? We're not doing that. So what we're doing is, we have brought in -- brought in HHS and also brought in FEMA to provide for enough safe facilities for them to not -- to get out of control of the Border Patrol, which was not designed to hold people for long periods of time, particularly children.

Get them out of those facilities. And most of them come with a phone number, too -- so what we're doing is we're putting together an entire organizational structure so that, within seven days, they're going to be able to get on the phone, contact that number, find out whether there is a mother or a father, whether it is safe, whether it is a secure circumstance to get the child to that adult.

“And so what we're doing now is, we're providing for -- in the past, what you do is HHS would take them to licensed providers, so there's beds, security, where there's health care, they're fed, they're cared for, while they determine whether or not there is someone in the United States they're entitled to go to.

“And that's what we're in the process of doing now. We will have, I believe, by next month enough of those beds to take care of these children who have no place to go. But they need to be taken care of while they're -- but the vast majority -- let's get something straight, though. The vast majority of people crossing the border are being sent back. Are being sent back, immediately sent back.”

Biden said his clear message is "don't come over" until his administration can set up an asylum application system in Central American countries.

And he said people who are coming here for "better opportunity, for economic reasons" don't qualify for asylum.