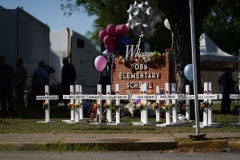 Crosses outside the Robb Elementary School in remembrance of the 21 killed on Tuesday, May 24, in Uvalde, Texas. (Photo by ALLISON DINNER/AFP via Getty Images)

And no one is hurting more than the families of the 19 children and two teachers massacred inside an elementary school while the first police on the scene -- as it turns out -- waited a little over an hour for reinforcements.

Yesterday's news conference and timeline offers no comfort, but it does raise a single, haunting question: Could more have been done sooner to save any of the terrified children and teachers trapped inside with a killer?

"We want to know what happened, recreate the scene," Escalon said. "That takes time."

Escobar also talked about one thing that did NOT happen:

"One more thing I forgot to mention, that I want to clear up, that came out early on. It was reported that a school district police officer confronted the suspect that was making entry. Not accurate. He walked in unobstructed initially.

"So, from the grandmother's house to the bar ditch to the school, into the school, he was not confronted by anybody, to clear the record on that. Four minutes later, law enforcement are coming in to solve this problem."

Those officers took gunfire, and waited for reinforcements -- for an hour, Escobar said. He also said the gunman started shooting at the school before he walked in through an unlocked back door.

Here is the timeline in Escobar's own words:

"On Tuesday, May 24th, at 11:28, suspect just west of here wrecked his vehicle, pickup truck that he took from his grandmother. He had just shot his grandmother in the face. She's alive. She's stable at this point.

"At 11:28, he's sitting there at the ditch. He jumps out the passenger side of the truck. According to witnesses, he's got a long-arm rifle and a bag. Later, we find out it's ammunition.

"At 11:40, he walks into the west side of Robb Elementary. According to reports, video we have obtained from outside, inside -- and again, we're still combing through that, so bear with us.

“Multiple rounds, numerous rounds are discharged in the school. We're trying to do -- get a number. We're in the process of analyzing that video.

"Four minutes later, local police departments, Uvalde Police Department, the Independent School District Police Department, are inside making entry. They hear gunfire. They take rounds. They move back, get cover. And during that time, they approach where the suspect is at.

"Officers are there, the initial officers, they receive gunfire. They don't make entry initially because of the gunfire they're receiving. But we have officers calling for additional resources. Everybody that's in the area, tactical teams, we need equipment, we need specialty equipment, we need body armor, we need precision riflemen, negotiators.

"Approximately an hour later, U.S. Border Patrol tactical teams arrive. They make entry. Shoot and kill the suspect. But you also had a county deputy and Uvalde Police Department that made entry and killed the suspect. Immediately, immediately, numerous officers.

"But during, they were taking gunfire, negotiations, and developing a team to make entry to stop him."

In response to questions, Escobar repeated that there was no officer, "readily available, armed" to confront the gunman as he approached and entered the school.

A reporter asked if the gunman responded to attempts to negotiate with him, and if he was still shooting during those attempts:

"During the negotiations, there wasn't much gunfire other than trying to keep the officers at bay. But that could change, depending -- once we analyze the video. But right now, according to the information, he did not respond."

Another reporter asked about the 12-minute gap between the time the gunman crashed his truck (11:28) to when he entered the school (11:40). "What happened in that 12 minutes?" a reporter asked Escobar.

"So, you got to understand, 11:30 is the information we have at this point that we can confirm. At 11:30 a.m., we got a crash and a man with a gun. And then you have responding officers.

"Could anybody have got there sooner?" Escobar said later. "You got to understand, small town. You had people from Eagle Pass, from Del Rio, Laredo, San Antonio, responding to a small community."

But, a reporter asked, "Should the officers have gone in sooner? Should they have waited for the tactical team?"

Despite widely viewed video of parents tussling with police officers outside the school -- parents desperate to go into the school themselves while police held them at bay outside -- Escobar said he has "not verified that."

"We have not verified is that a true statement or not, or is it just rumor out there?" he said. "You got to understand. We're getting a lot of information. We're trying to track down and see what is true. We want to vet it. That's all I have for questions. Thank you so much."