Physician Tells Senate, Ivermectin Is a COVID 'Wonder Drug;' 'If You Take It, You Will Not Get Sick' 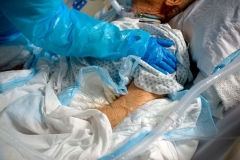 A healthcare worker tends to a patient in the Covid-19 ward at United Memorial Medical Center in Houston, Texas on December 4, 2020. (Photo by MARK FELIX/AFP via Getty Images)

(CNSNews.com) - Ivermectin is proving to be a "wonder drug" that is not approved for the treatment of COVID but should be, a pulmonologist told a hearing of the Senate Homeland Security Committee on Tuesday.

In an impassioned presentation, Dr. Pierre Kory, a physician at Aurora St. Luke's Medical Center in Milwaukee, begged the National Institutes of Health to review his study of Ivermectin, a drug that's been around for decades and is used to treat parasites.

"All I ask is for the NIH to review our data that we've compiled of all of the emerging data -- we have almost 30 studies. Every one is reliably and reproducibly positive showing the dramatic impacts of Ivermectin. Please, I'm just asking that they review our manuscript.”

Dr. Kory said he's "not just a random doctor" who claims to have a COVID cure: "I'm just asking, review our data."

Dr. Kory said instead of trying to develop expensive new drugs, he and his colleagues have spent months focusing on existing, "repurposed" drugs.

He said Ivermectin is proving to have a "miraculous impact.”

And when I say miracle, I do not use that term lightly, and I don't want to be sensationalized when I say that. That is a scientific recommendation based on mountains of data that has emerged in the last three months.

When I am told...that we are touting things that are not FDA- or NIH-recommended, let me be clear. The NIH, their recommendation on Ivermectin, which is to not use it outside of controlled trials, is from August 27th -- we are now in December. This is three to four months later.

Mountains of data have emerged from many centers and countries around the world, showing the miraculous effectiveness of Ivermection. It basically obliterates transmission of this virus. If you take it, you will not get sick.

“In early outpatient treatment, we have three randomized control trials and multiple observation as well as case series showing if you take Ivermectin, the need for hospitalization and death will decrease.

"The most profound evidence we have is in the hospitalized patients.  We have four randomized control trials there, multiple observation trials, all showing the same thing, you will not die, or you will die at much, much, much lower rates...It is proving to be a wonder drug.”

Dr. Kory noted that two researchers won the Nobel Prize in Medicine in 2015 for their studies on Ivermectin's efficacy in eradicating parasitic diseases, and now "it is proving to be an immensely powerful anti-viral and anti-inflammatory agent."

Kory said peer review of the new Ivermectin studies will take months that we don't have:

By the time they get to me in ICU, they're already dying, they're almost impossible to recover. Early treatment is key. We need to offload the hospitals. We are tired. I can't keep doing this. If you look at my manuscript, and if I have to go back to work next week, any further deaths are going to be needless deaths, and I cannot be traumatized by that.

I cannot keep caring for patients when I know that they could have been saved with eearlier treatment and that drug that will treat them and prevent the hospitalization is Ivermectin.

Dr. Kory reminded the committee that the elderly and minorities are dying at higher rates than anyone else:

"It's the most -- the most severe discrepancy I have seen in my medical career, and we are responsible to protect those disadvantaged members. We have a special duty to provide counter-measures. The amount of evidence to show that Ivermectin is life-saving and protective is so immense and the drug is so safe...it must be instituted and implemented."

Committee Chair Sen. Ron Johnson (R-Wis.) promised Dr. Kory that "before the day is out, we'll have a letter...to the NIH asking them to review" his findings.