Pence: 'Media Wants to Distract From the Biden Administration's Failed Agenda by Focusing on One Day in January' 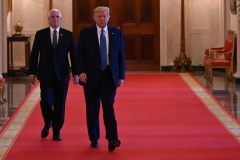 President Donald Trump and Vice President Mike Pence are seen at the White House on July 13, 2020. (Photo by JIM WATSON/AFP via Getty Images)

(CNSNews.com) - Former Vice President Mike Pence says he's focused on the future, while Democrats cling to the past -- specifically, the January 6 attack on the U.S. Capitol, which they are using to demonize the 74 million Americans who voted for Donald Trump.

Pence spoke with Fox News's Sean Hannity about President Biden's "failed agenda" and President Trump's success in making the nation more secure and the economy more prosperous. He explained how the withdrawal from Afghanistan would have worked under President Trump. And he said he "parted amicably" with Trump:

"Look, you can't spend almost five years in the political foxhole with somebody without developing a strong relationship," Pence said:

And, you know, January 6 was a tragic day in history of our Capitol building. But thanks to the efforts of the Capitol Hill police, federal officials, the Capitol was secured. We finished our work.

And the president and I sat down a few days later and talked through all of it. I can tell you that we parted amicably at the end of the administration, and we've talked a number of times since we both left office. But I believe that our entire focus today should be on the future.

I've campaigned a couple times for Glenn Youngkin, who will be a great governor for the state of Virginia. I've been traveling all across this country, helping our team running for the House and the Senate. I'll be helping governor's candidates throughout America.

I know the media wants to distract from the Biden administration's failed agenda by focusing on one day in January. They want to use that one day to try to demean the character and intentions of 74 million Americans who believed we could be strong again and prosperous again and supported our administration in 2016 and 2020.

But for our part, I truly believe we all ought to remain completely focused.  That's where I'm focused. And I believe the future is bright.

Pence said the Biden administration's withdrawal from Afghanistan "was the greatest foreign policy debacle since the Iran hostage crisis, and it never had to happen."

Pence said it would not have happened that way under the conditions set by President Trump:

And the president made it clear -- and I was in the Oval Office when he was speaking to Mullah Baradar -- that they would either keep the deal to work with the Afghan government and not harm any American personnel in Afghanistan and not be a safe harbor for terrorists or we would hit them harder than we'd ever hit them before. And as evidence that they took us seriously, we went 18 months without a single American casualty in Afghanistan.

But weakness arouses evil, Sean, and there's no question that the weakness evidenced by the Biden administration -- I would say beginning when they were silent when thousands of rockets were rained down on our cherished ally Israel from Hamas -- sent a signal into Afghanistan that we would not respond. And you saw, as you said earlier, you saw the Taliban march in to Mazar-al-Sharif and then just simply walk into Kabul.

And I just -- I really want people to know that I believe with all my heart that this never had to happen. I grieve for the 13 service members who were lost. Karen and I prayed and spent time with the family of Corporal Humberto Sanchez from Logansport, Indiana. It's hard for me to say it, but it just didn't have to happen.

But it's just, it's an example of what weak leadership means on the world stage, and it's such a contrast to the heavy-handed leadership of this administration at home. We have a president who is weak abroad but is very content to be lecturing the American people about vaccine mandates.

We have got to dig in, tell the story of what they're doing. And I truly do believe that the voice of the American people can turn back this massive big government socialist bill.

Pence noted that the Biden administration has unraveled all the Trump policies "that resulted in a stronger, more secure, more prosperous America."

And this latest massive bill that they're trying to force through the Congress is just the latest example of that. I mean, we cut taxes on working families and small businesses and created 7 million good paying jobs. We built 400 miles of border wall and negotiated with Mexico on the remain in Mexico agreement that reduced illegal immigration by 90 percent. Now we are in the middle of the worst border crisis in American history...

...And I have to tell you, on one issue after another, I'm absolutely convinced that the American people can see that in our administration, we were putting common sense, conservative principles into practice. Our nation, our border was more secure. Our economy more prosperous, our liberties more secure with 300 judges on...our courts and three on the Supreme Court.

And I've got to tell you, Sean, I know we’ve got a couple elections this fall in places like Virginia and New Jersey, and we got some big elections next year, and I think we're going to get it all back. I think the American people see our record -- they see their record of liberalism and incompetence. And I think the American people are going to take the reins turn this country around.

Pence talked about winning back Congress in 2022 and "winning back America in 2024." Pence hasn’t yet said whether he intends to run for president.