Pelosi: SCOTUS Draft Opinion on Abortion 'Has to Be Softened'; 'Let's Just Be Prayerful About This' 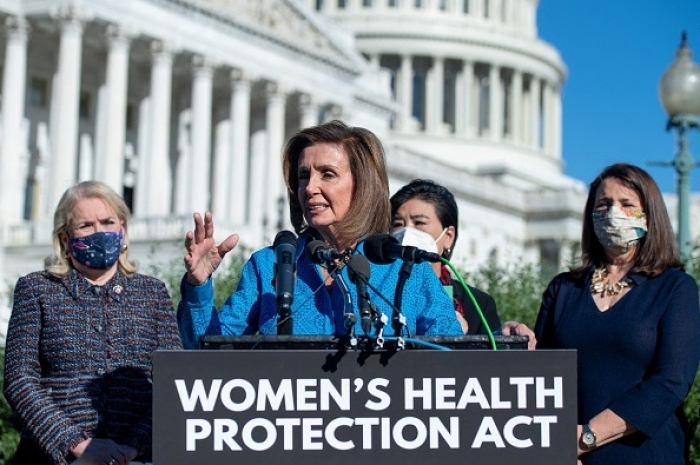 Speaker of the House Nancy Pelosi (D-Calif.) joins House Democrats at a news conference on the "Women's Health Protection Act," on September 24, 2021. (Photo by SAUL LOEB/AFP via Getty Images)

(CNSNews.com) - House Speaker Nancy Pelosi (D-Calif.) devoted part of her Mother's Day to an interview with Margaret Brennan, host of CBS's "Face the Nation." The topic was abortion -- the leak of a draft Supreme Court ruling that would overturn Roe v. Wade and send the issue back to the states to decide.

"This is about something so serious and so personal and so disrespectful of women," Pelosi said:

"Here we are on Mother's Day, a week where the court has slapped women in the face, in terms of the disrespect for their judgments about the size and timing of their families.

"So, the fact is, let's keep our eye on the ball. And the ball is in the court of those justices, one of whom at least said over and over again that precedent -- that precedence has been established again and again on Roe v. Wade and that -- so, this decision is about being anti-precedent and anti-privacy, and has serious ramifications as we go -- as we go down this path. And it has to be softened.

"I don't think there's a good outcome, but there's a better outcome as far as this is concerned. And, again, let's just be prayerful about this. This is -- this is about respect for privacy. What's next? What's next? Marriage equality? What's next, contraception? What is next?"

Pelosi prefaced those comments by saying the "focus we have right now is an urgent one...to try to improve this."

Pelosi’s comments about “softening” and improving referred to the midterm election.

"The fact is, in '09, we really did not have a pro-choice Democratic Party. I had to fight against some of the people who did not want to pass the Affordable Care Act because they were concerned that it might enable more freedom of choice. It really didn't go down that path.

"Right now, we do have a pro-choice Democratic Congress," Pelosi said, noting that the House passed a bill in September 2021 codifying Roe v. Wade. The vote was 218-211, with all Republicans and one Democrats (Rep. Henry Cuellar of Texas) voting against it.

The Women's Health Protection Act  is expected to come up for a vote -- and fair -- in the evenly divided Senate this week.

Pelosi said the leaked Supreme Court majority draft opinion "puts an urgency on what's happening in the election. Two more -- one or two more senators could sweep back the filibuster rule for this purpose, and then women would have a right to choose."

Pelosi also claimed that "most people always thought that this debate in the Congress was about the termination of a pregnancy, but it wasn't."

Pelosi said the debate is about "family planning."