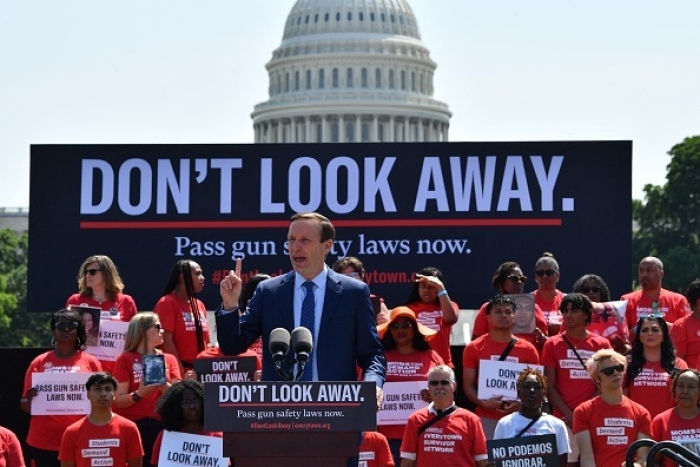 "However, we will oppose this gun control legislation because it falls short at every level. It does little to truly address violent crime while opening the door to unnecessary burdens on the exercise of Second Amendment freedom by law-abiding gun owners," the NRA's lobbying arm said.

Shortly after the bill's text was released on Tuesday afternoon, the Senate voted 64-to-34 to take up the bill.

According to the NRA-ILA:

"This legislation can be abused to restrict lawful gun purchases, infringe upon the rights of law-abiding Americans, and use federal dollars to fund gun control measures being adopted by state and local politicians. This bill leaves too much discretion in the hands of government officials and also contains undefined and overbroad provisions – inviting interference with our constitutional freedoms.”

More specifically, the NRA's objections to the bill include:

-- Allowing states to use federal taxpayer dollars to impose state-level gun confiscation orders, or “red flag” laws. (Some states have “red flag” laws allowing lawfully-owned firearms to be seized before the accused has an opportunity to contest the accusations.)

-- "Unnecessary and ineffective waiting periods for certain law-abiding adults who are not prohibited from purchasing firearms by giving anti-gun Attorney General Merrick Garland the discretion to delay firearm sales for mere 'cause.'”

-- The bill would "significantly increase the number of Americans who are federally barred from possessing firearms by expanding prohibitions for non-domestic, non-violent misdemeanor convictions. Virtually no other constitutional right is taken away for misdemeanor convictions, and this legislation would treat the Second Amendment as a second-class right."

-- "Nowhere in the legislation are the Second Amendment rights of law-abiding Americans advanced, and it is being rushed to the U.S. Senate floor for votes, bypassing hearings, markups and amendments on the legislation."

The bill -- introduced by Republicans John Cornyn of Texas and Thom Tillis of North Carolina and Democrats Chris Murphy of Connecticut and Kyrsten Sinema of Arizona -- could pass by the end of the week, Senate Majority Leader Chuck Schumer (D-N.Y.) said Tuesday.

Beyond objections to the bill's content, a number of Republican senators also object to the rush to pass the bill.

“Process matters,” Sen. Mike Lee tweeted.  “This evening, we received the text of a new gun proposal, and a blind vote was required within an hour. With only moments to review, no committee hearings, and no regular order, a vote was held with implications concerning an essential constitutional right. The American people deserve better from the world’s ‘greatest deliberative body.’”

Sen. Josh Hawley (R-Mo.) tweeted: "Here we are voting to move on a bill negotiated entirely behind closed doors, released only an hour ago, that no one has had time to fully read, that ignores the national crime wave & chips away instead at the fundamental rights of law abiding citizens. NO."

Sen. James Lankford (R-Okla.) tweeted: "Minutes ago the bipartisan group of Senators dropped a bill on gun violence - that only they have seen - now Schumer scheduled votes on it tonight.  This feels like a 'trust me, It’s fine' moment."

Sen. Marco Rubio tweeted: "We are being asked to vote tonight to begin debate on a gun proposal whose legislative text was only made available less than an hour ago."

Sen. John Cornyn (R-Texas), who was recently booed at a gathering of Texas Republicans for co-sponsoring the bill, tweeted, "Today we released text of our bill to make attacks like the one in Uvalde less likely, while protecting the Second Amendment. I am proud that this mental health and school safety bill places NO NEW RESTRICTIONS on law-abiding gun owners."

The bill addresses three main issues, including expanded mental health screening (lots of grants and demonstration projects); firearms (juvenile records may be disqualifying for weapons purchases; broadens the definition of "dating relationship" to disqualify more people convicted of misdemeanor domestic abuse); and "other matters," including the establishment of a "Federal Clearinghouse on School Safety."

According to the bill, "The Clearinghouse shall serve as a Federal resource to identify and publish online, through SchoolSafety.gov, or any successor website, evidence-based practices and recommendations to improve school safety for use by State and local educational agencies, institutions of higher education, State and local law enforcement agencies, health professionals, and the general public," the bill says.

Among other things, the clearinghouse "shall include comprehensive evidence-based school safety measures."

"In identifying the evidence-based practices and recommendations for the Clearinghouse, the Secretary shall --

It appears to be another avenue for the federal government to influence the "learning environment."

In the House of Representatives, the Freedom Caucus issued a statement opposing any legislation, including the new Senate bill, that includes "unconstitutional" red flag laws and incentive for states to impose "backdoor universal background checks."

"Red flag laws permit the preemptive seizure of firearms from Americans without due process by allowing any person to report a gun owner to law enforcement and petition for the confiscation of that individual’s firearms, even before the gun owner has an opportunity to defend themselves. As a result, experts have found that one-third of confiscation orders were wrongly issued against innocent Americans, and it often takes a tremendous effort to overturn," the Freedom Caucus said.

"These laws are ripe for abuse as they give government the power to decide who is deemed mentally fit to own a firearm based on the say-so of any accuser, and that should concern every American, as some Democrats have already signaled their intention to use red flag laws to target gun owners based on their political beliefs."

"Furthermore, studies have found that states’ red flag laws have had no significant impact on murder and suicide rates, or the number of people killed in mass shootings."

The Freedom Caucus noted that an existing practice known as the "Baker Act" allows for the temporary detention of people believed to be dangerous.

The House Freedom Caucus is urging Republican Senators "to use every procedural tool at their disposal to ensure Members of Congress are granted sufficient time to study and analyze any legislative text that emerges from the Senate’s negotiations."