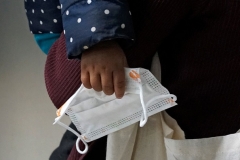 (CNSNews.com) - Dr. Francis Collins, director of the federal Centers for Disease Control and Prevention, said he'll be surprised if COVID cases don't surpass 200,000 a day in the next couple of weeks.

He blamed the contagious delta variant and the fact that some 90 million people are still unvaccinated, making them "sitting ducks for this virus."

I think, traditionally, people kind of considered, well, you know, kids aren't going to get that sick with this. Yet more than 400 children have died of COVID-19. And right now we have almost 2,000 kids in the hospital, many of them in ICU, some of them under the age of four.

So anybody who tries to tell you, well, don't worry about the kids, the virus won't really bother them, that's not the evidence. And especially with delta being so contagious, kids are very seriously at risk. And it's up to all of us to do everything we can to protect them, as well as we're trying to protective everybody else at the same time.

As of August 11, the CDC's National Center for Health Statistics says a total of 354 children ages 0-17 have COVID listed on their death certificates. The 354 children 0-17 who died of or with COVID since the start of the pandemic represent 0.0579 percent of the 610,425 total COVID deaths in this country (based on CDC's most recent death certificate data).

Collins on Sunday made the case for children wearing masks in school, a CDC recommendation based on "more than a dozen publications showing that evidence," he said:

And already you can see in this country the schools that have started to open without mask requirements, outbreaks are happening. And what happens then? The kids are sent home for virtual learning, which is what we were trying to avoid.

It's really unfortunate that politics and polarization have got in the way of a simple public health measure.

This mask that I'm holding has somehow become a symbol that it never should have been. This is basically just a life-saving medical device. And somehow it's now being seen as an invasion of your personal liberty. We never should have gone there.

It's heartbreaking for me as a person who's not a politician, I'm a scientist, I'm a public health person, I'm a doctor, to see how masks have gotten into this very strange place with parents and others shouting about it. We never should have allowed that to happen.

Host Chris Wallace asked Collins if the masses of people illegally entering the United States are responsible for spreading COVID in this country:

"Well, it's certainly a cause of concern," Collins said.

They have very significant masking requirements there (in migrant facilities) but it is certainly possible.

But, you know, let nobody try to say that's why the U.S. is in trouble. The rate of infection in Mexico is actually lower than it is right now in places like Texas and Louisiana and Florida. I think that's a bit of a distraction.

We've got enough of a problem with our own citizens who have refused to roll up their sleeves. So maybe that would be a better thing to focus on if we're trying to end this. That -- that seemed like it was not going to get us where we need to be. It's an issue, but it's certainly not the cause of our current dilemma.