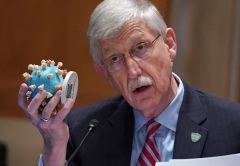 NIH Director Dr. Francis Collins holds up a model of the coronavirus at a May 26, 2021 congressional hearing. (Photo by SARAH SILBIGER/POOL/AFP via Getty Images)

(CNSNews.com) - Dr. Francis Collins, director of the National Institutes of Health, told Fox News on Wednesday that he never rejected the idea that the coronavirus leaked from a lab in Wuhan China, "although there was no evidence to support it."

But in his interview with Martha MacCallum, Collins did reject the suggestion that he and Dr. Anthony Fauci steered reporters away from the lab-leak theory early on.

And he "categorically" denied that NIH gave grant money to the Wuhan Institute of Virology to do "anything that would have created a virus that would have been increased in its transmissibility or its virulence for humans."

Pressed for answers in the interview, Collins said he was "a little disturbed" to be "spending all this time on this issue."

"And here we are today. We should be talking about how to put COVID-19 behind us, not going back to January 2020," Collins said. "We'll get the answers. Right now, we don't have any new data," he added.

Collins said he thinks "the most likely explanation" for the emergence of COVID-19 "is still a natural transmission":

Because that's always been the case with other coronaviruses. With SARS, it turned out to be a civet cat. With MERS, it was a camel. With Ebola, we still don't know what the intermediate host was. It's not easy to figure this out. So just on a historical basis, that's the most likely path that was traveled.

And again, extraordinary claims require extraordinary evidence to claim that the lab was responsible. We need to know that, but I don't think anybody, you or any of the others, are coming to think should jump to the conclusion that that's the most likely explanation right now. We do not know that. It might be, but we do not (know)."

MacCallum said it appears that Collins and Dr. Fauci "both jumped to the conclusion very early on, that any explanation of this that could be a lab leak was something that we were all waved off of. Why were we waved off of that so early on, when we're now being told that we don't know, and that we should do a thorough investigation of exactly that?"

"Martha, I deny that you were waved off of that by me," Collins said.

"I would say you were waved off of some more outrageous conspiracy theories that had really no categorical sense to them. But the idea of a lab leak was never anything that I thought was impossible. I just want to say that right, clearly now."

Collins told MacCallum he wasn't talking about a possible lab-leak in a newly revealed April 2020 email he wrote to Dr. Fauci -- an email that had the subject line "conspiracy gains momentum."

Well, I never thought, Martha, of that e-mail, only reported by the subject line, would become a topic for Fox News afternoon programming. But here we are.

Let me try to clarify. There were a lot of conspiracy theories and other ideas floating around at that point. One of them was that actually, SARS-CoV-2 had been a bioengineered bioweapon created on purpose by human intervention by the Wuhan Institute of Virology. That doesn't fit with what we know about this particular viral genome.

Another was that NIH had somehow been complicit in the generation of this dangerous virus. And I can tell you categorically that did not happen.

But then there was this other idea that maybe it was an accident. A lab leak that the institute had been studying this virus, that it happened somehow in nature, and it got loose. I never rejected that one, although there was no evidence to support it.

So, when we talk about what happened, let's try to clarify the difference between those various statements or various options. Some of them are pretty outrageous, some of them are still plausible.

But even the lab leak hypothesis, you know, Carl Sagan had this famous statement that extraordinary claims require extraordinary evidence.

MacCallum asked Collins if he knew that three scientists at the Wuhan lab became ill with COVID-like symptoms in November 2019, before the onset of the pandemic.

"I was aware that there might have been some individuals at the lab who were ill," Collins said. "We knew back last year that there had been some possibility of laboratory workers who had fallen ill, most likely with the flu or some other benign illness, but it was a fact that was known out there.

“Let's just be clear here, and Martha, I don't think we know what happened in Wuhan. It is possible there was a lab leak, but again, that's an extraordinary claim. What we need then is to have an evidence-based expert- driven open investigation.”

As for the recent suggestion that NIH research grants were used to fund gain-of-function research in Wuhan, Collins noted that NIH is the largest supporter of medical research in the world:

We knew that bat-driven coronaviruses had caused already two major scares as far as pandemic: SARS and MERS. It would have been irresponsible for us not to try to understand what else might be lurking out there.

But I categorically deny that NIH in its grand funding in a subcontract to the Wuhan Institute of Virology was permitted to do anything that would have created a virus that would have been increased in its transmissibility or its virulence for humans. I categorically deny that. And I'm a bit unhappy that people keep repeating those claims when they're simply not true.

At the end of the interview, Collins said he agrees "we need to get to the bottom" of COVID-19's origins:

"But gosh, you and I just spent a whole bunch of minutes here talking about some issue that we need to get an answer to. And meanwhile, people are still dying from COVID-19, and we didn't even talk about the ways to get to an end of this with vaccines.

“So please, could we have a bit more of the focus on how we're going to save lives, while we're talking about how this all started. We need both of those, don't we?”

MacCallum told Collins that “questions about the origins of this are not going away…and I think we need to make sure that we do everything we can to protect our national security when it comes to these labs and any potential funding that might have gone to those labs. So we are going to continue to ask those questions."