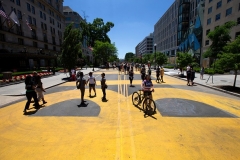 Their agenda "has not a damn thing to do with saving black lives."

"Look, I'm going to tell some hard truths that people are not going to want to hear," Innis told Ingraham:

The BLM movement, Black Lives Matter movement, was founded by Alicia Garza and a number of other co-founders that were promoting a hard Marxist and LGBT agenda...And look, I don't have a problem with people exercising their First Amendment rights.

If you look at their agenda, defunding the police -- that would put black lives in danger. But it's even more than that, Laura. They have as a part of their platform on their own website that we want to disrupt -- disrupt! -- the Western-prescribed nuclear family.

According to Innis, BLM wants to “overthrow capitalism, they want to overthrow Western civilization, and they see America as the biggest clear and present danger to fulfilling that agenda. And they’re using black people to do it,” he objected.

Innis noted the recent murders of black police officers who were trying to protect small businesses that provide jobs in the same communities that BLM pretends to support.

“Laura, it is so gross, and for all of these corporations…that give a dollar or millions of dollars to the BLM agenda, they are destroying black lives. ...The irony, Laura, is that it's the illusion of black supremacy and the reality of a Marxist agenda that will bury all of us."

The "what we believe" section of the BLM website reads in part:

We are guided by the fact that all Black lives matter, regardless of actual or perceived sexual identity, gender identity, gender expression, economic status, ability, disability, religious beliefs or disbeliefs, immigration status, or location.

We make space for transgender brothers and sisters to participate and lead.

We are self-reflexive and do the work required to dismantle cisgender privilege and uplift Black trans folk, especially Black trans women who continue to be disproportionately impacted by trans-antagonistic violence.

We build a space that affirms Black women and is free from sexism, misogyny, and environments in which men are centered.

We practice empathy. We engage comrades with the intent to learn about and connect with their contexts.

We make our spaces family-friendly and enable parents to fully participate with their children. We dismantle the patriarchal practice that requires mothers to work “double shifts” so that they can mother in private even as they participate in public justice work.

We disrupt the Western-prescribed nuclear family structure requirement by supporting each other as extended families and “villages” that collectively care for one another, especially our children, to the degree that mothers, parents, and children are comfortable.

We foster a queeraffirming network. When we gather, we do so with the intention of freeing ourselves from the tight grip of heteronormative thinking, or rather, the belief that all in the world are heterosexual (unless s/he or they disclose otherwise).