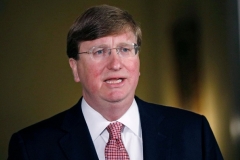 (CNSNews.com) - Republican Gov. Tate Reeves of Mississippi -- the state at the heart of the Supreme Court's recent abortion ruling -- says his state is in the process of certifying that Roe v. Wade has been overturned, which means Mississippi's "trigger law" banning abortion could take effect in a matter of days, depending on a new lawsuit filed by abortion advocates.

"We're hopeful that that litigation will be done quickly," Reeves told Fox News's Neil Cavuto on Tuesday. "We are hopeful that the Mississippi Supreme Court will rule in our favor and allow our trigger law to go into effect."

And if abortion is banned under that trigger law, how will the state deal with prescription abortion pills, that can be delivered by mail?

"Well, under our bill that should go into effect, that was passed, by the way, in 2007 -- it was passed with a Democrat speaker of the House and a Democrat chairman of public health -- it just kind of tells you a little bit about how far the Democrat Party has moved on this issue," Reeves said.

"But our trigger law would not allow for that (pills) to occur, because abortion would be illegal, with the exception of the life of the mother and rape."

Cavuto asked the governor how the state would find women who receive abortion drugs in the mail:

"[W]e have a Board of Medical Licensure here in the state of Mississippi that ensures that the licensing physicians are doing what they're supposed to do," Reeves said.

"They have a component wherein they can do whatever research they need to do and ensure that the physicians that are licensed in Mississippi, whether it's through telemedicine or otherwise, are following the laws of our state.

"And if you're not following the laws of our state, then, obviously, they're going to pull your medical license and you no longer have the ability to practice medicine here."

Reeves said the state will not monitor the mailboxes of women, but instead will be police "the practice of medicine."

"We police that with over 7,000 physicians today. And we actually have been a leader in Mississippi when it comes to telemedicine, because we live in a rural state. And telemedicine plays a vital, critical role in the providing of medical services to our people.

"But we also have a Board of Medical Licensure, whose sole responsibility is to license physicians and ensure that they are following the laws of our state.

"And should physicians try to practice in Mississippi and not follow the law, then they will lose their license. And, to the extent they're breaking the law, they will be prosecuted as such."