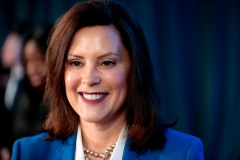 (CNSNews.com) - Michigan House Republicans on Wednesday introduced a resolution calling for the impeachment of Michigan Gov. Gretchen Whitmer, a Democrat who "has violated her constitutional oath of office by failing to respect the separation of powers and by exercising powers expressly granted to the legislative branch."

But Michigan's Republican House Speaker Lee Chatfield reportedly said he will not take up the resolution, which he called a "distraction."

In a statement, the governor's office said Whitmer "doesn't have any time for partisan politics or people who don’t wear masks, don’t believe in science, and don’t have a plan to fight this virus. Right now, she is focused on saving lives. The governor will continue to work hard for all 10 million Michiganders. This is about Michigan vs. COVID-19. Governor Whitmer doesn’t care if you’re a Trump Republican or a Biden Democrat. We are all in this together.”

“Over the course of eight months, I have watched powerlessly as the governor has used the COVID-19 pandemic as an opportunity to trample over the constitutional rights of Upper Peninsula families and the great people of Michigan,” LaFave said:

For eight months, the governor has set out on a quest of corruption; exceeding her constitutional duties, disregarding the separation of powers, ignoring the spirit of the Supreme Court ruling, weaponizing the state’s health department, and rewarding political allies.

People are hurting, and it seems as though statewide petitions and costly lawsuits are not sending a strong enough message to the executive office. As pleas of Michigan residents continue to be overlooked and the Legislature remains excluded from the equation, I am left with no other recourse than to exercise my constitutional authority by invoking articles of impeachment against the governor.

This is absolutely the last thing I want to do, but I would be betraying my conscience and oath of office to defend the Michigan Constitution by ignoring such blatant misconduct.

LaFave said the surge in COVID-19 cases in Michigan and across the country is "something we should take seriously."

"We should all do our part by choosing to wash our hands frequently, wear a mask, and practice social distancing," he said.

LaFave said he introduced the resolution "because the people of Michigan – through their duly elected representatives – deserve a seat at the table when major decisions that impact their lives are made.

“My colleagues and I are not looking to throw away all of the governor’s ideas or replace them with our own; we’re simply asking to collaborate, provide input on behalf of our constituents and receive shareable information to increase communication throughout our communities.

"Michigan residents are better served when their leaders are working together. That’s why the governor’s unilateral and unconstitutional approach must come to an end.”

According to LaFave’s resolution, the four articles of impeachment against Gov. Whitmer include failing to respect the separation of powers by exercising power granted to the legislative branch; violating the constitutional rights of the people of Michigan; issuing executive orders against the interests of the people and state; and using state resources to reward political allies.

The Michigan Restaurant & Lodging Association is suing the Whitmer administration for prohibiting indoor restaurant dining for the second time this year.

"We have taken this action only after careful deliberation and as the last available option to prevent the outright devastation of restaurant operators and their hundreds of thousands of employees across the state," the Association said.

Whitmer told CNN on Wednesday she has “incredible empathy” for Michigan’s restaurant industry:

First let me say, you know, the restaurant industry has really had a tough year because of COVID, because there's not been a national strategy and we've seen COVID just explode across the country in waves.

That's what happens in restaurants. And that's why it's really going to be critical that the feds get their act together and give us some stimulus support for these small businesses, for these restaurant workers.

I have incredible empathy for what they're struggling with and yet we have to follow the epidemiology, the public health experts and make decisions that combat the spread before our hospitals get overwhelmed and before we have 1,000 deaths a week in Michigan, because that's what the modeling is telling us where we're headed right now.

LaFave included the following timeline as part of his impeachment effort: