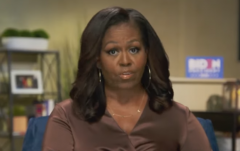 (CNSNews.com) - In her speech to the Democrat National Convention Monday night, former first lady Michelle Obama, speaking about the presidency, declared, "the job is hard" and requires "a moral compass."

She said she knows this because she's seen it close-up, during the eight years her husband was president:

I am one of the handful of people living today who have seen firsthand the immense weight and awesome power of the presidency.

And let me once again tell you this -- the job is hard. It requires clear-headed judgment, a mastery of complex and competing issues. A devotion to facts and history. A moral compass and an ability to listen. And abiding belief that each of the 330 million lives in this country has meaning and worth.

A president's words have the power to move markets. They can start wars or broker peace. They can summon our better angels or awaken our worst instincts. You simply cannot fake your way through this job.

In saying, "You simply cannot fake your way through the job," Michelle Obama was obviously referring to President Donald Trump, who is among those who have questioned Joe Biden's mental fitness for a demanding job.

At an appearance in Minnesota Monday, President Trump called Biden "the puppet of left-wing extremists trying to erase our borders, eliminate our police, indoctrinate our children, vilify our heroes, take away our energy...no fossil fuel, destroy our Second Amendment, attack the right to life, and replace American freedom with left-wing fascism. Left-wing, we are going left-wing all the way."

Trump called Biden a puppet who will just say, "'Well, whatever they want,' because he has no clue."

Biden's age and frequent gaffes -- his infrequent forays outside his Delaware home and his tightly controlled public appearances -- have prompted concern even among some Democrats.

"With 99 days to go before Election Day, the race is Biden's to win," Lockhart wrote. "There is nothing Trump can do at this point to win it on his own. He has to depend on Biden faltering over the next three months to get reelected."