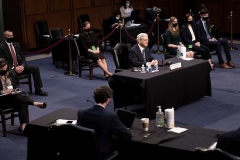 Judge Merrick Garland testifies at his confirmation hearing for the position of US Attorney General before the Senate Judiciary Committee on February 22, 2021. (Photo by BRENDAN SMIALOWSKI/AFP via Getty Images)

(CNSNews.com) - Attorney General-nominee Merrick Garland took a number of questions on racism, disparate justice, and implicit bias at his confirmation hearing on Monday.

He said the U.S. justice system "does not" treat people equally in this country; he defined systemic racism as "discrimination and widespread disparate treatment of communities of color and other ethnic minorities;" and he said implicit bias is just part of being human.

"I want to ask you about this concept of implicit bias," Sen. John Kennedy told Garland. "Does that mean I'm a racist, no matter what I do or what I think? I'm a racist but I don't know I'm a racist?"

"The label racist is not one that I would apply like that," Garland replied:

Implicit bias just means that every human being has biases. That's part of what it means to be a human being. And, the point of examining our implicit biases is to bring our conscious mind up to our unconscious mind and to--to know when we're behaving in a stereotyped way.

Everybody has stereotypes. It's not possible to go through life without working through stereotypes. And, implicit biases are the ones that we don't recognize in our behavior. That doesn't make you racist, no.

Garland said implicit bias shouldn't be taken as a pejorative: "This is just an element of the human condition. So, you shouldn't take that as pejorative. Implicit bias is just a descriptor of--of the way people's minds--everyone's mind works."

Kennedy also asked Garland, "When you refer to systemic racism, what is that?"

Kennedy interrupted: "So, you're basically saying there's--there's a disparate impact."

Garland said systemic racism in institutions shows itself in "pattern or practice."

Earlier in the hearing, Sen. Cory Booker asked Garland, "Does our justice system treat people equally in this country at this point?"

"Sadly, and it's plain to me, that...it does not," Garland answered.

I don't think that that is because Americans are worse. But, what underlies that is the disparate treatment of blacks and communities of color.

Garland said marijuana arrests are "definitely evidence of disparate treatment in the system, which I think does arise out of implicit bias, unconscious bias maybe, sometimes conscious bias."

Asked what he plans to do about disparate treatment that takes such a toll on minority communities, Garland said:

"So one set of things we can do is the mass incarceration example that I began with. We can focus our attention on violent crimes and other crimes that put great danger in our society and not allocate our resources to something like marijuana possession. We can look at our charging policies and go--and stop charging the highest possible offense with the highest possible sentence."