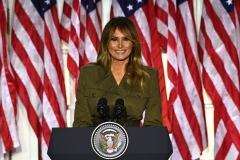 (CNSNews.com) - "As you have learned over the past five years, he is not a traditional politician," first lady Melania Trump said about her husband Tuesday night.

"He doesn't just speak words. He demands action, and he gets results," she said in a speech delivered from the White House Rose Garden.

As for the words Donald Trump does speak:

We all know Donald Trump makes no secrets about how he feels about things. Total honesty is what we as citizens deserve from our president.

Whether you like it or not, you always know what he is thinking. And that is because he is an authentic person who loves this country and its people and wants to continue to make it better.

Donald wants to keep your family safe, he wants to help your family succeed. He wants nothing more than for this country to prosper, and he doesn't waste time playing politics.

Mrs. Trump said she would not use her time in the limelight to attack Democrats, "because as we saw last week, that kind of talk only serves to divide the country further."

However, she did call out the activist media which has gone full-throttle against Trump:

Here are those two snippets:

-- "Just as you are fighting for your families, my husband, our family, and the people in this administration are here fighting for you. No matter the amount of negative or false media headlines or attacks from the other side, Donald Trump has not and will not lose focus on you. He loves this country and he knows how to get things done."

-- "For many years, I watched him grow concerned and frustrated, and I'm so proud to see the many things he has done in such a short time. America is in his heart. So while at times, we only see the worst of people in politics on the evening news, let's remember how we come together in the most difficult times. And while debate rages on about issues of race, let's focus on the strides we have made and work together for a better tomorrow for everyone."

In a “special message for the mothers of this country,” Melania Trump also criticized social media, a comment that critics found ironic, given her husband’s many Twitter rants:

“This modern world is moving so fast, and our children face challenges that seem to change every few months. Just like me, I know many of you watch how mean and manipulative social media can be. And just like me, I'm sure many of you are looking for answers, how to talk to your children about the downside of technology and their relationships with their peers.”

-- #beBest is back!  A UGE bore!  She can speak several words in a few languages.  Get that illegal alien off the stage!

-- Why are they promoting this awful person, #melania? Was it in her contract?  She says it feels like just yesterday they were at their first convention.  Maybe to you, Mel.  For the rest of us every day has been a horrible slog thru the 9th Circle of Hell.  #beBust

-- I’m surprised Trump wants to destroy the #PostOffice.  He got all his wives from it.

-- Melania lacks warmth so severely that I just had to turn my AC down.

-- I feel bad for anyone who risked coronavirus to sit through this. Shoulda used your shot on something more exciting & substantial, like nachos.