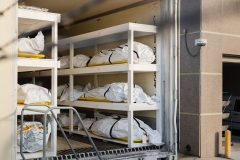 Bodies wrapped in plastic line the walls inside a refrigerated trailer used as a mobile morgue by the El Paso County Medical Examiner's office in El Paso, Texas on November 13, 2020. (Photo by JUSTIN HAMEL/AFP via Getty Images)

(CNSNews.com) - The COVID crisis could have been halted "very quickly" if the nation had devoted time, energy and resources to early intervention and early treatment, a medical expert told Congress on Thursday.

"The hospitals aren't currently aren't overwhelmed, but they may be, based on the uptick, the surge in cases," Dr. Peter McCullough testified. McCullough is vice chair of Internal Medicine at Baylor University Medical Center and a professor of medicine at Texas A&M College of Medicine.

"We're getting buried, and we need home treatment," he told a hearing of the Senate Homeland Security Committee.

"As we sit here today, we have…the greatest mass of infected Americans that we've ever had since the start of the pandemic, and Americans are pouring into hospitals untreated. The hospital census is already at capacity.

"A national calamity of unimaginable mortality is right around the corner. In a matter of weeks to months, Americans are going to be horrified with what they see on the news with respect to hospitals overrun, mortality skyrocketing for both COVID and non-COVID complications and conditions, and--and patients further infecting other Americans as this pandemic spirals out of control."

McCullough urged the government to prod federal agencies to assist doctors with early treatment options, before COVID patients require hospital treatment -- "because we can prevent hospitalization and death," he said.

"I can't think of a single viral infection where the best advice is to wait two weeks before we start treatment in the hospital. That is the current NIH recommendations. Americans are appalled by this. We always treat serious viral infections with multiple drugs up front, early. These are principles of treatment."

Dr. McCullough and one of the other three medical expert testifying along with him are proponents of hydroxychloroquine, a prescription drug that is approved for the treatment of malaria and certain auto-immune diseases.

When taken immediately after the onset of symptoms -- not later, when the patient is severely ill-- it’s also effective in treating COVID cases, they said.

A coronavirus test site is set up in Los Angeles, California on November 10, 2020. (Photo by FREDERIC J. BROWN/AFP via Getty Images)

Dr.  George Fareed – now the medical director and family medicine specialist at Pioneers Medical Center in Imperial Valley, California -- gave his recipe for a drug "cocktail" that he's found effective in the early treatment of his patients with COVID or even the flu and other viral infections:

Dr. Fareed also recommended a multivitamin. “And if the hydroxychloroquine is unavailable, patients can take a flavonoid such as quercetin or EGCG that are antioxidants that help bring zinc into--in the cell.”

Dr. Fareed said zinc is one of the antiviral components of the treatment. "But the quercetin can be taken three times a day, and that's over the counter, 500 milligrams three times a day during the acute infection. But it's much more effective using the agent that has multiple actions as an antiviral, hydroxychloroquine."

Dr. McCullough noted that "none of these drugs are a cure, but they allow the patient to get through the illness, like myself," without leaving home, infecting others, and burdening the health care system.

"I'm 57. I've got asthma. I've got orthostatic cardiovascular disease," Dr. McCullough told the committee. "Believe me, when I got that (positive COVID) test result, I was terrified, and every American is terrified.

"Every older patient with heart and lung disease, when they get the report, they're not falsely reassured and sit at home, think this is going to be a picnic. They are scared to death.”

Dr. McCullough said he enrolled in a clinical trial:

I took hydroxychloroquine as part of a multi-drug sequenced program, which is exactly what's in the peer-reviewed literature, which is the framework of how Americans should be treated. Well, I was a few days behind in recognizing what was going on. The virus got into my lungs. I had pulmonary involvement, and I got anxious.

I got to the point where I thought maybe I could be hospitalized. And I can tell you first hand, this cocktail of drugs works for sure, but hydroxychloroquine, dose by dose, settles down that fever, settles down and reduces the amount--the severity/intensity of symptoms, and by that mechanism, that's the reason why hydroxychloroquine reduces hospitalizations and deaths.

When patients get anxious and they can't breathe anymore, they go to the hospital. So, this doesn't--this isn't complicated. There's over 100 studies. They are all supported. The EUA (Emergency Use Authorization) says when the preponderance of evidence shows the drug works and has acceptable safety, we ought to go. My view is, we need to go with this on everybody high risk in America.

McCullough blamed "academic malfeasance" for the distrust and maligning of hydroxychloroquine. (Committee Chair Ron Johnson opined, "The only explanation is the politicization of it."  President Trump was an early proponent.)

"This isn't the government," McCullough said. "This is people in my field, in academic medicine, who are committing academic fraud."  He noted that some of the academic "scare papers" on hydroxychloroquine have been withdrawn.

"And, I can tell you, I'm at Baylor in Dallas, we have the world's most recognized cardiac pathology program in the world. Our senior examiner has held in his...hands, more human hearts than anybody in the history of mankind. I can tell you firsthand, hydroxychloroquine does not cause giant scars in the heart.

"So, academic medicine is committing fraud. It's committing, I think, a crime against humanity. There must be a motivation behind this that's much bigger than just Democrat versus Republican. I am extremely concerned, honestly, about the--the academic contribution to scare tactics in the world."

McCullough noted that in India, hydroxychloroquine is given to patients right away, and "their deaths per million population is a tiny fraction of America," because they're treating COVID patients at home with hydroxychloroquine and other drugs. "Remember, it's multi-drug program, probably about four--four or so drugs plus supplements, and they've handled the infection."

Same story in Greece, he said. "First line, you're given hydroxychloroquine, okay?"

But, he added, "To show you how off kilter the world is, in Queensland, Australia, a doctor will be put in jail for prescribing hydroxychloroquine. ...In the United States, we're caught up in this--this flurry of--of data and confusion. Something is going very wrong in this world."

McCullough said the data on Remdesivir are "mixed."

"Remdesivir doesn't prevent a hospitalization because you have to be in the hospital to get it," he said:

And the drug is administered too late. The problem is, the virus was replicating two weeks ago. By the time that he (his patient) got into the hospital, the virus has already done its job.

So it's a fool's errand to test a single drug like Remdesivir late in the illness. This is no different than HIV. We need multiple drugs early up front. And the best we have right now are these mixes of vitamins, supplements, and then the generic medications. The best we have.

Now listen, the NIH is--has some oral drugs that they're sponsoring with pharmaceutical trials to move forward. If there's an oral drug tomorrow that can fit into a treatment protocol it's ready to go. We can--we can plug it right in.

The NIH and the biopharmaceuticals right now have delivered zero oral medications to doctors in practice. Zero. That's our batting average right now. So for all the science we've put into this as a country with the greatest pharmaceutical companies in the world, zero oral drugs for the next patient who gets sick with COVID-19.

-- Contagion control, including masks, social distancing, etc. He noted that this is where the "vast majority" of government and media efforts are focused, but it hasn't worked.

--Hospitals. "They're overrun. We're doing all the best technologies we possibly can in the hospital, but the hospital is an inadequate safety net.")

--Vaccination, which should close out the pandemic.