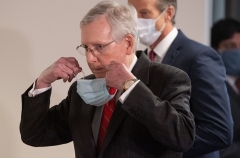 Senate Majority Leader Mitch McConnell (R-Ky.) removes his mask before speaking at a May 5 news conference. (Photo by SAUL LOEB/AFP via Getty Images)

And clearly that was the view of the attorney general. I gather it's now in a rather unusual procedure, being reviewed by the district judge before whom the case was.

I think we are just anxious to get the facts. What actually happened? The American public needs to know, all of us would like to know.

And one thing about Washington, you guys are so good at your job, the truth always comes out. Sometimes it takes a little longer than other times. But we'll find out what, in fact, did happen.

McConnell said he will leave it up to Senate Judiciary Committee Chairman Lindsey Graham to decide where the Trump-Russia-Flynn investigation goes and what witnesses will be called.

President Trump has tweeted that former President Obama ought to be called to testify.

But Graham rejected that idea on Thursday.

“I am greatly concerned about the precedent that would be set by calling a former president for oversight," he said in a statement. "No president is above the law. However, the presidency has executive privilege claims against other branches of government."

Graham also said, "both presidents are welcome to come before the committee and share their concerns about each other. If nothing else, it would make for great television. However, I have great doubts about whether it would be wise for the country.”

Recently released documents show that 16 Obama administration officials requested to know the name of the American citizen who was mentioned anonymously in foreign intelligence reports. That unmasked person turned out to be incoming National Security Advisor Michael Flynn, whose name was leaked to a Washington Post columnist.

Flynn's attorney Sidney Powell, meanwhile, has released documents indicating that the FBI was out to get Flynn, never letting him know he was the target of a counterintelligence investigation when two agents went to the White House to interview Flynn, four days into the new Trump administration.

Powell says Flynn was  set up, framed, and then prosecuted in a "shocking" assault on "our cherished system of self-government, the right of citizens to choose their President, and the hallowed peaceful transition of power."

Flynn earlier pleaded guilty to making false statements to the FBI, but his attorney says he did so under duress, and Flynn is now trying to withdraw that guilty plea.

In his statement on Thursday, Sen. Graham said the Judiciary Committee "will begin holding multiple, in-depth congressional hearings regarding all things related to Crossfire Hurricane starting in early June:

Our first phase will deal with the government’s decision to dismiss the Flynn case as well as an in-depth analysis of the unmasking requests made by Obama Administration officials against General Flynn.  We must determine if these requests were legitimate.

Our next area of inquiry, later this summer, will be oversight building upon the Horowitz report about FISA abuses against Carter Page.  My goal is to find out why and how the system got so off the rails.

Finally, we will look at whether Robert Mueller should have ever been appointed as Special Counsel. Was there legitimate reason to conclude the Trump campaign had colluded with the Russians?

Also See:
Flynn's Attorney: 'Absolutely' This Goes All the Way to Obama