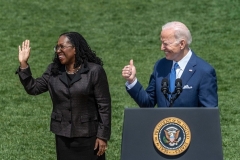 Judge Ketanji Brown Jackson and President Joe Biden celebrate Jackson's confirmation to the US Supreme Court at the White House on April 08, 2022. (Photo by JIM WATSON/AFP via Getty Images)

(CNSNews.com) - Senate Republican leader Mitch McConnell (R-Ky.) says the nation's crime problem "has spiraled out of control" while Democrats, including the Biden administration, "continue to team up and find new ways to go soft on crime."

McConnell pointed to the confirmation of Judge Ketanji Brown Jackson as part of a "deliberate effort by Democrats to make the federal judiciary softer on crime. They are specifically, intentionally stuffing the federal bench full of men and women whose starting perspective tilts toward sympathy for criminals rather than victims," McConnell said Wednesday in a speech on the Senate floor.

“But the American people are not exactly clamoring for President Biden to dramatically tilt the entire judiciary toward the criminal-friendly perspective, least of all during this historic crime surge."

McConnell urged senators to oppose controversial judicial nominees as the first step in stopping the Democrats' "willful campaign to make the judiciary systematically softer on crime. Innocent Americans can’t afford it," he said.

On the same day McConnell spoke, Axios reported that the U.S. government "is bracing for a potential surge in political violence" if and when the Supreme Court hands down a final ruling that is expected to overturn Roe v. Wade. Axios said it obtained an unclassified DHS memo dated May 13.

According to the report, "Law enforcement agencies are investigating social-media threats to burn down or storm the Supreme Court building and murder justices and their clerks, as well as attacks targeting places of worship and abortion clinics."

At the White House on Wednesday, spokeswoman Karine Jean-Pierre was asked about the DHS bulletin warning of what media outlets are calling a "summer of rage."

"So, look, the President is clear on this question," Jean-Pierre said:

"He believes the right to peace -- to peacefully protest in this country is fundamental, but he also believes that violence, threats, and intimidation have no place in political discourse anywhere. That is true whether it is in front of a courthouse or in front of a healthcare clinic.

"And that’s the thing.  I feel — it seems like, to us, it is very one-sided on what we call out as — as intimidation or as violence.  So we want to make sure we’re calling out on...both sides of what is happening and what we’re seeing.

"While protests — but while protests have been peaceful to date, the Department of Justice has U.S. Marshals providing support to support [the Supreme] Court Marshal, and the Pres- — and the President believes Congress should pass the legislation to fund increased security for Court and judges as soon as possible.”

“Yesterday, in reference to this, the Department of Homeland Security said they are ‘committed to protecting Americans’ freedom of speech and other civil rights and civil liberties, including the right to peacefully protest. DHS is also committed to working with our partners across every level of government and the private sector to share timely information and intelligence, prevent all forms of violence, and to support law enforcement — enforcement efforts to keep our communities safe.’"