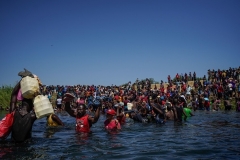 These Haitian migrants are part of a group of 15,000 people who camped on the US side of the border, in Del Rio, Texas. (Photo by PAUL RATJE/AFP via Getty Images)

Mayorkas also refused four times to answer a direct question about how many of the 15,000 Haitians who crowded into Del Rio, Texas have been released into the United States. Their crowded encampment under a bridge was mostly empty as of Friday morning.

We accumulate our statistics on a monthly basis, and, of course, we'll publish those as well. The individuals whom we release and place into immigration enforcement proceedings are those, for example, with acute medical conditions, specific vulnerabilities, or if our operational capacity so dictates.

It's very important, Wolf, to underscore the fact that this is not a matter of immigration policy, but rather this is a matter of public health policy. We are applying the law pursuant to an order that the Centers for Disease Control issued in light of the fact that this country and the world is in the midst of a pandemic. We are exercising that authority, as we are required to do, to protect the health and well-being of the migrants themselves, our personnel, local communities and the American public.

Blitzer tried again: "So, I take it, 1,400 have been sent back to Haiti. There's a local organization helping migrants, say more than 1,000 have been released here into the United States. Is that right? Have a thousand Haitians been allowed to stay in the United States at least for now?"

"Well, what we are doing is we are continuing to remove individuals," Mayorkas said. "We have moved people from Del Rio to other processing centers along the border, to ensure the safety and security of the individuals and to facilitate the removal process.

"Those individuals who are not able to remove by reason of their acute medical conditions, we place in immigration enforcement proceedings or address our operational capacities as need be. But we are very focused on applying the public health laws that we are obligated to enforce."

Blitzer asked a third time: "So, can you give us a number, how many have been allowed to stay here in the United States, for whatever reason?"

"We believe it is a very small percentage of the total that assembled in Del Rio, Texas, and that will be removed," Mayorkas said.

"Wolf, if it's 10 percent or 15 percent, I don't have the precise numbers. I assure you, it's a minority of the individuals for the reasons that I have articulated, and they are placed in immigration enforcement proceedings, where they are able, where they appear before a judge, and if, in fact, they make a valid claim to remain in the United States, then, of course, we honor that. And if not, they are removed as well."

Blitzer noted that the special envoy to Haiti resigned on Thursday. "I'll read a quote from his resignation letter," Blitzer said: "I will not be associated with the United States' inhumane, counterproductive decision to deport thousands of Haitian and illegal immigrants," Blitzer quoted envoy Daniel Foote as saying.

Blitzer asked Mayorkas to respond to Foote's criticism that the Biden administration's policy is "inhumane and counterproductive."

"Well, first of all, let me say, we don't use the term 'illegal immigrants,'" Mayorkas said. "I actually issued a policy in the Department of Homeland Security. We use the term non-citizen to respect the dignity of every individual, as a preliminary matter.

"Second, I will defer to the State Department. That is a matter within the State Department's province, but let me say this. Having been in government service for more than 20 years, I'm aware of the fact that some people have policy differences, and I respect and acknowledge that fact. I respectfully and vehemently disagree with what this individual, whom I do not know, articulated..."

Blitzer asked Mayorkas if he is "personally comfortable" with sending Haitian migrants back to Haiti.

Earlier this year, Mayorkas granted temporary protected status to Haitians who were in the United States as of July 29, meaning they can stay here until conditions improve in Haiti.

"We have, since July 29th, studied the conditions in Haiti, and determined that we can, in fact, safely and humanely return individuals to that country," Mayorkas said.

"There are many countries, not only in our hemisphere, but in the world, that don't enjoy the conditions of the United States of America that we have rebuilt in this country. We are mindful of that. But we made a determination, based upon our study, that we could do what we were doing in exercising the public health imperatives that I have spoken of."