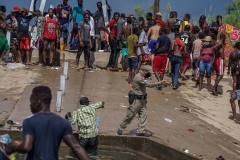 A group of migrants, many from Haiti, flood into Del Rio, Texas, on September 18, 2021. (Photo by PAUL RATJE/AFP via Getty Images)

(CNSNews.com) - "The border is secure. We're executing our plan," Homeland Security Secretary Alejandro Mayorkas said repeatedly, robotically, throughout two days of questioning on Capitol Hill. It was his automatic response every time he was challenged to explain the overwhelmed southwest border.

"Mr. Secretary, the question is, is the border more secure now under your leadership?" Rep. August Pfluger (R-Texas) asked him on Wednesday:

"Congressman, it is no less secure than it was previously," Mayorkas said.

As press reports say many of the Haitians who came here illegally are being bused and flown to various places in the United States, tens of thousands more foreigners are gathering in South and Central America to make the trip to the United States. Pfluger told the committee, there's "40,000 to 60,000 on the way."

How many of them are terrorists, criminals, or other enemies of the United States?

"And I want to know, I know it's been asked, how many known or suspected terrorists have entered this country this year?" Pfluger asked. "The American public deserves to know what the threat is to our country. Why will we not release numbers?"

"Congressman, I've been very clear that I'd be very pleased to share that information with you in a classified context," Mayorkas said.

Mayorkas bristled when Pfluger said the federal government "has abdicated the duty to protect our country."

"I respectfully disagree," the secretary said. "We have never abdicated the duty to protect our country."

As Mayorkas testified before the House Homeland Security Committee, the Associated Press was reporting that many of the Haitian migrants camped under a bridge in Del Rio, Texas "are being released into the United States."

That article (among others) quoted two U.S. officials as saying that Haitians have been freed on a "very, very large scale" (thousands of them) in recent days.

Many have been released with notices to appear at an immigration office within 60 days, the report said.

The report contradicts what Mayorkas said on Monday in Del Rio -- that "If you come to the United States illegally, you will be returned, your journey will not succeed, and you will be endangering your life and your family's life."

It also contradicts his "border is secure" mantra.