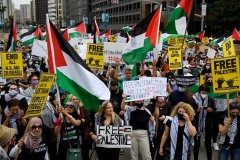 Palestinian supporters rally in Los Angeles on May 15, 2021. (Photo by PATRICK T. FALLON/AFP via Getty Images)

"This poison of anti-Semitism is growing in your party, and your silence isn't going to fix it."

Levin named Rep. Rashida Tlaib (of Palestinian descent) as an "out-of-the closet anti-Semite," and he mentioned her fellow leftists -- Reps. Omar, Ocasio-Cortez, Pressley and Bush and Sen. Bernie Sanders -- as members of "the hard Marxist, Hamas wing of the Democrat Party."

"The Democrats in the House of Representatives voted unanimously against sanctioning Hamas last week, during the time when Hamas was firing 4,000 missiles into Israel," Levin continued:

Now, Joe Biden sees this. He sees on TV individuals with antifa-like clothing, with the Palestinian flag chasing down Jews, in cities throughout this country, in cars, attacking Jews, organized like Black Lives Matter and antifa, beating Jews, graffiti on synagogues, including swastikas and so forth. We haven't seen anything like this in, I don't know -- ever.

The FBI says 60 percent of all anti-religious hate crimes is against Jews. The Jews are a tiny percentage of the population. What did Chuck Schumer say about this who's Jewish from New York? I didn't hear him say anything. If he said anything, he did it under his breath.

What did the Speaker of the House Nancy Pelosi say about it? I didn't hear her say anything. If she did, it was under her breath.

Joe Biden had to be lobbied by liberal Jewish groups to do something on Friday and finally Saturday put out a statement.

How about the FBI director who says white supremacy is the great danger in this country? Is he blind to what's taking place?

It's a tiny little country. It's the only Jewish state on the face of the earth, and Arabs in Israel have more liberties, more due process rights, more property rights, more legal rights than Jews do in any country in any Muslim or Arab society, which means they have none.

So, this is quite appalling to me. And at the same time this is going on, you have Democrats embracing Black Lives Matter, which is a hate-America, Marxist, anarchist violent organization that also is anti-Semitic and backs the BDS [Boycott, Divestment, Sanctions] movement.

President Biden's comment on the recent anti-Semitism came in a Monday morning tweet, written by one of his aides -- Biden is not known as a tweeter: "The recent attacks on the Jewish community are despicable, and they must stop. I condemn this hateful behavior at home and abroad — it’s up to all of us to give hate no safe harbor," the Biden tweet said.

A short time later, House Speaker Pelosi (or someone tweeting for her) also condemned anti-Semitism, writing: "The recent spike in antisemitic attacks against Jews around the country and the world is horrific, heartbreaking & demands action. Antisemitism cannot be tolerated. We must come together as Americans to condemn and combat this appalling bigotry and hatred."

At the White House press briefing on Tuesday, Biden spokeswoman Jen Psaki was asked to discuss "how the administration is working with various stakeholders and outside groups" to try to curb the rise in anti-Semitic attacks and harassment:

The best Psaki could do was point to Biden's tweet:

This is something that he has spoken passionately out against — anti-Semitism — throughout his career, from one of his first — first speeches — just to take you in the time — time machine — as senator.  He condemned anti-Semitism from the Senate floor in May of 1973 in his — and, obviously, up to his vocal condemnation of the events at Charlottesville.

He recognizes this is a persistent evil that always deserves our attention and efforts.  We’ve been working in close and ongoing contact — we’ve been in close and ongoing contact, I should say, with the Jewish community to offer our support.  We’ve taken steps to confront anti-Semitic violence and hate crimes of any type, including by signing into law stronger hate crimes legislation just last week.

But we are also working to bolster safety and security of synagogues and other religiously affiliated facilities and organizations.  DHS has briefed security directors across the Jewish community in the United States and preparing — and is preparing a public awareness bulletin that will include security measures individuals and facilities can take.

So, we have an across-government effort that the President is quite focused on.

The reporter followed up: "Some Jewish groups are planning a day of action against anti-Semitism on May 27th, which is this Thursday. Do the president or the vice president have plans to make any remarks there or make virtual appearances?"

"I know that the President will be traveling on Thursday, and he’ll — in Ohio, and he’ll be delivering an economic speech," Psaki responded. "I can see if there’s anything more in scheduling plans to read out to all of you."