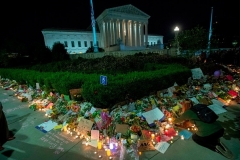 Mourners light candles and leave flowers outside of the US Supreme Court as people pay their respects to Ruth Bader Ginsburg on September 19, 2020. (Photo by JOSE LUIS MAGANA/AFP via Getty Images)

(CNSNews.com) - President Donald Trump is going to nominate somebody to the Supreme Court who "will be faithful to the Constitution."

"Since when is that radical?" Levin asked on Sunday.

Democrats, on the other hand, are attacking all of our institutions --  our schools, a vaccine, our borders, the courts, the Senate, the electoral system -- "because their attitude is, if we can't control everything, then burn it down."

Here are Levin's comments to Fox News in context:

The American people should know, we own this government. We own this country. We own every damn seat on that Supreme Court. It didn't belong to Ruth Bader Ginsburg, it doesn't belong to the Democrat Party. And when these people take an oath, they take it to the Constitution and the country, not the Democratic Party.

The president likes to say the media is the enemy of the people. I hate to tell you, he's right in many respects, but the Democrat Party is a diabolical institution that's getting worse and worse. It has a diabolical history, whether it is slavery, segregation, Jim crow, or today, this so-called socialism, whatever it is, that's really Marxism.

A short time later, Levin said Trump's nominee, not yet announced, should not be a problem for anyone who respects the Constitution:

They call them right-wingers and regressive and so forth. So now embracing and following our magnificent Constitution, which the Democrats hate, which the left hates, which their surrogates hate -- that now is considered some kind of extreme right-wing kind of thing. And if we don't get to replace Ruth Bader Ginsburg with a likewise former ACLU or whatever radical justice, then we're going to burn the system down.

They embrace a group called Black Lives Matter that has as its mission the destruction of the United States. They embrace Antifa by not criticizing it by name. A Marxist anarchist organization that is attacking cops with lasers and Molotov cocktails.

This is the modern day Democrat Party. The radicals of the 1960s now run that damn party. It not only needs to be defeated, it needs to be crushed, or we are going to lose our precious Constitution, our precious liberty and our founding principles.

Senate Majority Leader Mitch McConnell has warned that Democrats, given the majority, will abolish the filibuster, making it easier to pass their agenda. And since Ginsburg's death, calls are growing for Democrats to pack the Supreme Court if Republicans confirm Trump's nominee.

A number of Democrats, including Joe Biden, have used early voting as a reason not to confirm Trump's Supreme Court pick. Early voting already is underway in four states, and a growing number of states have adopted unsolicited ballot-mailing to all registered votes, a system conducive to fraud, Trump and other critics warn.