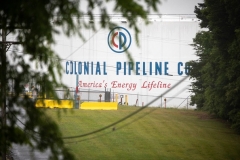 (CNSNews.com) - "Isn't it true that pipelines are more carbon-delivery efficient than trains or trucks or other forms of delivery?" Rep. Darrell Issa (R-Calif.) asked the masked (and muffled) climate guru John Kerry on Wednesday:

"Yeah, that is true. I think that is true," Kerry, President Biden's climate adviser, responded. "But it doesn't mean necessarily we want to be adding another (pipe)line when there are other alternatives. But is it better than train and better than -- yes it is, in my judgement."

So why did President Biden cancel the Keystone XL Pipeline as soon as he took office?

"On the Keystone, the administration is trying to put teeth in its words and its commitment to the climate crisis," Kerry said.

"We do not need to be building that additional infrastructure at this moment when we have other options, which are readily available to us, for how we supply and what we supply. We need to do a greater build-out of renewable in this country."

'Pipe is the best way to go'

A reporter asked Granholm about the "feasibility of using rail cars to transport fuel into the affected areas."

"Yeah, the DOT is looking at that and so we'll have to wait till their analysis is done," Granholm said:

So this particular area of the country there--this is why we have doubled down on ensuring that there's an ability to truck oil in, gas in. But it's--it's--the pipe is the best way to go. And so that's why hopefully this company, Colonial, will in fact be able to restore operations by the end of the week, as they have said.

In his testimony on Wednesday, John Kerry said the United States will be using gas "for some period of time."

"And I'm not one of those who comes in and says, you've got to shut it down today, tomorrow. We can't do that. What we can do is begin to take steps that reduce reliance, even as we keep alive the ability to have sufficient gas for the purposes we need."

Kerry said the United States is going to be using crude oil "well into the future":

"Well, crude first of all is used for lots of other things than fuel and power," and "it could well be delivered by pipeline," he said.

Kerry said the goal is to" accelerate the transition to clean fuel...it's not going to happen overnight. Now, I'd rather see gas used rather than coal anywhere in the world," he added.