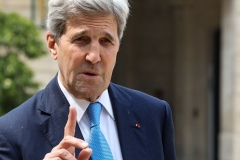 (CNSNews.com) - "This is the year" to make "key decisions" on climate change, and that includes a possible carbon tax, John Kerry, the special presidential envoy for climate, told CNN's Fareed Zakaria on Sunday.

Kerry said a carbon tax is "one option of many things we're going to have to consider and may wind up doing."

Zakaria noted that "to send a signal to the world, most experts believe the important thing is that the United States get its house in order, and to really tackle the climate crisis...you need a carbon tax. Do you think that the United States could do that? It's the simplest price signal that will...slowly but surely change the economy. Can we do it?" Zakaria asked Kerry.

"Well, we could do it, I think," Kerry responded.

I mean, theoretically, yes, it is one option of many things we're going to have to consider and may wind up doing. There are many people who make the point that -- and I personally accept it, that that is one of the most significant, bold steps you can take to actually have an impact in a rapid way.

And I believe there are ways to do that and make it very progressive to protect people who have to drive long distances, to get to work, do things like that. There are ways to cushion any negative impacts on it.

But -- here's the 'but' -- we really need to do a great deal more than that. General Motors just announced that they are going to be moving to pure electric cars, nothing but electric in 15 years. A lot of European motor manufacturers have made the similar kind of announcement, and I think that is the trend.

People are going to move to electric cars, which means you're going to have to produce more electricity, ultimately, but there are ways to do that clean.

So this is all achievable and I think the important point, Fareed, for people to really focus on is, it's a very exciting economic transition. It's a job creating transition. There are just going to be millions of jobs created with new products coming online, innovation that takes place, technology advances that will help us do things that we may not be able to do today, but it will happen because the demand is there, and that demand is going to have a huge change in the kinds of things, the kind of work that is available to people.

Nobody is going to be told they have to go do that. They're not going to be ordered to go do it. But the marketplace itself is going to work in a way that makes it inviting and profitable. And frankly, cleaner, and healthier and more secure.

Zakaria noted that some of President Biden's climate actions, such as canceling the Keystone XL pipeline and barring new oil and gas leases on public lands, will put people out of work, some immediately. "What do you say to those people," Zakaria asked Kerry.

We've historically, constantly been creating jobs when our economy is growing. Obviously, the first objective to do that is to be able to deal with COVID. COVID has knocked economies all around the world for a loop, so that has to happen.

But as the president has said, as President Biden has said many times, that COVID actually offers us the opportunity to build back better. Because the economy has been rocked, as we come back, we will be putting major investments into various sectors of the economy to get it moving again.

And if those investments are done in a way, Fareed, that...are looking to develop hydrogen fuel, for instance, or the making of those electric cars, I mean, people don't lose a job in the transition to electric cars because the car still has to be built, the wheels have to be put on it, the electric -- the batteries have to be put in it and people are going to work at doing those things.

So we've already seen remarkable growth. There are 55,000 new jobs in Texas, all in wind. In Texas, the home of the fossil fuel industry. I mean, this is a transition with the fossil fuel companies themselves. I mean, look at BP or Shell or other large fossil fuel companies, they're diversifying. They're engaged in the creation of these renewable jobs now and doing research in carbon capture and storage and so forth.

So they're going to be massive, literally millions of jobs created over these next years. And there will be a transition in our economy just the way there was in the 1990s when computers and cell phones and other things started to be created and AT&T changed.

Kerry, a true believer in human-caused climate change, said "huge fortunes" stand to be made through innovation in the private sector:

"The person who discovers how to take carbon dioxide out of the atmosphere and store it adequately, the person who comes up with battery storage that is 25 or 30 days of storage, those are game changers. And there's going to be a huge amount of money made in that because the demand is there to do this and the alternative is that the planet changes so profoundly negatively, that life itself is not supportable in many parts of the planet and will be changed forever in others."

The alternative, Kerry said, is to spend "billions of dollars cleaning up after storms and natural disasters that he believes are exacerbated by a changing climate:

"Citizens are going to spend this money," Kerry said. "They're either going to spend it cleaning up or building barriers or moving homes or whatever it's going to be.

“But there's a way to do this productively that actually moves our economies forward and allows the United States to push the curve of technology, which we're really good at, and begin to invent the new products of the future, create the economy of the future, make the air cleaner, life healthier and make the United States of America more secure."