Kamala Harris: ‘We Cannot…Live in a Country With Any Level of Pride When Our Babies Are Being Slaughtered’ 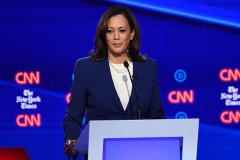 (CNSNews.com) - "We cannot tolerate a society and live in a country with any level of pride when our babies are being slaughtered," Sen. Kamala Harris told MSNBC in February 2018, shortly after the mass shooting at Marjory Stoneman Douglas High School in Parkland, Florida, where 17 people, mostly students, were killed by a former student.

Harris later tweeted a video clip of the interview:

Here's a transcript of what she said:

As a prosecutor for years, and appreciating homicide and being able to talk with a judge about it and a jury about it, I had to look at autopsy photographs. When you see the effect of this extreme violence on a human body, and especially the body of a child, maybe it will shock some people into understanding, this cannot be a political issue. We have to be practical.

I support the Second Amendment, but we have to have -- we have to have smart gun safety laws. And we cannot tolerate a society and live in a country with any level of pride when our babies are being slaughtered.

But on the issue of abortion, Harris is a staunch advocate. At the Oct. 15, 2019 Democrat primary debate in Westerville, Ohio, Harris warned that "reproductive health care is under attack in America."

Here's a transcript of her view on abortion:

The reality of it is, this is still a fundamental issue of justice for women in America. Women have been given the responsibility to perpetuate the human species. Our bodies were created to do that. It does not give any other person the right to tell a woman what to do with that body. It is her body, it is her right, it is her decision.

Harris favors repealing the Hyde Amendment, which bars taxpayer funding of abortion; and she has co-sponsored legislation that would ensure the availability of abortion and the elimination of restrictions on abortion providers.

For her efforts, Harris has earned a 100-percent rating from NARAL Pro-Choice America.

Back to Harris's stand on gun control:

In the June 27  primary debate in Miami, Harris faulted Congress for not having "the courage to act" on gun control:

"Which is why, when elected president, I will give Congress 100 days to bring all these good ideas together and put a bill on my desk for signature. If they do not, I will take executive action and put in place the most comprehensive background check policy we've had.

“I will require the ATF to take the licenses of gun dealers who violate the law. I will ban by executive order the importation of assault weapons."