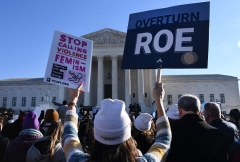 Abortion rights advocates and pro-life supporters demonstrate in front of the US Supreme Court on December 1, 2021. (Photo by OLIVIER DOULIERY/AFP via Getty Images)

(CNSNews.com) - The U.S. Supreme Court heard oral arguments Wednesday in Dobbs v. Jackson, a case challenging the constitutionality of a Mississippi law that bans most abortions after 15 weeks of pregnancy.

U.S. Solicitor General Elizabeth Prelogar argued against the Mississippi law, saying the Supreme Court, in Roe v. Wade, "correctly recognized that the Constitution protects a woman's fundamental right to decide whether to end a pregnancy before viability.”

She concluded, “If this court renounces the liberty interest recognized in Roe and reaffirmed in Casey, it would be an unprecedented contraction of individual rights and a stark departure from principles of stare decisis," she said. "The court has never revoked a right that is so fundamental to so many Americans and sos central to their ability to participate fully and equally in society. The court should not overrule this central component of women's liberty."

Justice Clarence Thomas pressed Prelogar on what the specific "right" is that she's defending: "Is it specifically abortion? Is it liberty? Is it autonomy? Is it privacy?" Thomas asked.

"The right is grounded in the liberty component of the 14th Amendment, Justice Thomas," Prelogar said. "But I think that it promotes interest in autonomy, bodily integrity, liberty and equality. And I do think that it is specifically the right to abortion here, the right of a woman to be able to control without the state forcing her to continue a pregnancy, whether to carry that baby to term."

"So I don't think that there is anything unprecedented or anomalous about the right that the court articulated in Roe and Casey -- and the way that it implemented that right by defining the scope of the liberty interest by reference to viability and providing that that is the moment when the balance of interest tips, and when the state can act to prohibit a woman from getting an abortion based on its interest in protecting the fetal life at that point."

"So the right specifically is abortion?" Thomas asked.

"It's the right of a woman prior to viability to control whether to continue with a pregnancy, yes.

"Thank you," said Thomas, ending that portion of his questioning.