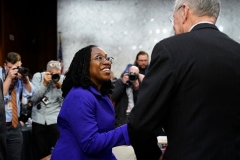 (CNSNews.com) - Judge Ketanji Brown Jackson, in response to written questions, has told the Senate she does not hold a position on whether individuals have natural rights that come from God, not the law.

Sen. Chuck Grassley (R-Iowa), a member of the Judiciary Committee that will vote on Jackson's nomination to the Supreme Court, told a hearing on Monday that Jackson took a pass on that important question:

Here's what Grassley said at the beginning of today’s hearing, as he explained why he is a “no” vote on Jackson’s confirmation:

"Now, at one point in written questions to her, Sen. Cruz posed this question: "Please explain in your own words the theory prevalent among members of the Founding Fathers' generation that humans possess natural rights that are inherent or unalienable."

“She seemed to have an understanding of this when she answered by saying the theory that humans possess inherent or inalienable rights is reflected in the Declaration of Independence, which states, 'We hold these truths to be self-evident, that all men are created equal, that they are endowed by their Creator with certain unalienable rights, among them, life, liberty and pursuit of happiness.’

“Then in the next question: ‘Do you hold a position on whether individuals possess natural rights, yes or no?’

“It seemed to me what -- to her understanding that she should easily have said -- said yes to that, but she took a position she didn't have a position. So part of having judicial philosophy is having an understanding of the fundamental principles in our Constitution. Natural rights are part of that system.

“But as Judge Jackson said in a written response, she does not, quote, "hold a position on whether individuals possess natural rights."

“I take issue with this, as natural rights are basic to our constitutional system and principles of limited government. Under our Constitution, we are endowed by our Creator -- well, I don't have to repeat that.

"All other rights are reserved to the people under the Tenth Amendment, recognizing the principle of limited government is what makes America the exceptional government compared to all others, and obviously sets our Constitution apart from all others."