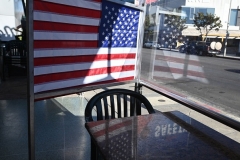 (CNSNews.com) - As COVID cases, hospitalizations and deaths rise in this country, the nation's labor force awaits mass vaccination. In the meantime, some states are now ordering another round of business shutdowns, a burden that falls heavily on bars, restaurants and other small businesses that have had to lay off workers.

The Labor Department's Bureau of Labor Statistics says the economy added 245,000 jobs in November, the smallest number since April.

And after six straight months of post-pandemic employment gains, the number of employed people in this country dropped by 74,000, to 149,732,000 in November.

At the same time, the number of unemployed people -- those out of work but looking -- also dropped, which pushed the unemployment rate down two-tenths of a point to 6.7 percent.

In November, the civilian non-institutional population in the United States was 261,085,000. That included all people 16 and older who did not live in an institution, such as a prison, nursing home or long-term care facility.

Of that civilian non-institutional population, 160,467,000 were participating in the labor force, meaning they either had a job or were actively seeking one during the last month. This resulted in a labor force participation rate of 61.5 percent in November, a weakening from the 61.7 percent participation rate in October, and well below the Trump-era high of 63.4 percent set this past January and February.

The labor force is made up of the employed and the unemployed. The remainder -- those who have no job and are not looking for one -- are counted as “not in the labor force," and this number increased in November to 100,618,000, the highest it's been since May.

With schools and some businesses closed, many Americans have dropped out of the labor force, at least temporarily.

Another 14.8 million persons reported that they had been unable to work because their employer closed or lost business due to the pandemic--that is, they did not work at all or worked fewer hours at some point in the last 4 weeks due to the pandemic. Among those who reported in November that they were unable to work because of pandemic-related closures or lost business, 13.7 percent received at least some pay from their employer for the hours not worked, up from 11.7 percent in October.

About 3.9 million persons not in the labor force in November said they were prevented from looking for work due to the pandemic, up from 3.6 million in October. (To be counted as unemployed, by definition, individuals must either be actively looking for work or on temporary layoff.)