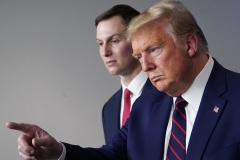 (CNSNews.com) - While Democrats and their media allies pillory President Trump for objecting to the expansion universal mail-in ballots, all Trump wants "is a fair election," his son-in-law Jared Kushner told CBS's "Face the Nation" on Sunday.

Host Margaret Brennan noted that elderly Americans "might be nervous about in-person voting." She asked him, "Are you worried you're going to disenfranchise some of your own voters in the next election by not giving emergency aid to the Postal Service now?"

"I will give you a quick answer on that," Kushner said:

Number one, Dr. Fauci said this week that there should be no fear for people to go out and vote in person. Number two, I have a friend in New Jersey who just got married. That person got sent two ballots, one in her old name and one in her new name.

I think what President Trump wants is a fair election. If you have a tried-and-true system, where they've been doing it like absentee ballots, where there's some security mechanisms built in, that's totally acceptable. That's a great thing to do.

But you can't have a new system being tried where there's not the right time to do it and expect them to get it right, and then expect that Americans will have confidence in the elections.

Brennan interrupted him, "But you're not afraid this could backfire on your own campaign?"

"Look, we have a great operation. We're very confident," Kushner said. "We're in much better shape now than we were in 2016. We have over a million-and-a-half volunteers in the field, 1,500 paid staff on board in all the different states. We're playing in states that we didn't win last time. We think we have a great opportunity.

"And, again, just like President Trump achieved a historic Middle East deal, which I hope we'll get to talk about, he continues to defy odds and accomplish things.

"And the American people are tired of politicians who come to Washington, don't get anything done. They want people who, like President Trump, who may not do things in a conventional way -- but he delivers results. And that's what the people want from their leaders."

Brennan gave herself the last word: "Well, and -- and many of those voters would like to vote safely by mail, if they're not comfortable going to a polling facility."

Kushner, the father of three young children, also said he's comfortable sending them back to school.

He noted that children "have a six times higher chance to die from the flu than from the coronavirus. So, based on the data I have seen, I don't believe that that's a risk. Again, this virus impacts different people in different ways.

"We know a lot more now than we did. And assuming -- our school is not opening up five days a week. I wish they were. But we absolutely will be sending our kids back to school. And I have no fear in doing so."