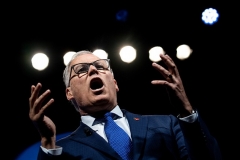 (CNSNews.com) - "It is clear that our states do have authority to protect our people, in the U.S. Constitution. There's no question about that," said Washington Gov. Jay Inslee, one day after four Republican state lawmakers sued him for exceeding his authority and "unacceptable tyranny" in refusing to lift his stay-at-home order, which has closed businesses and banned social gatherings.

In fact, Inslee just extended his order until the end of the month. The lawsuit says Inslee, a Democrat, should trust people to protect themselves, their workers and their customers.

He accused Republicans of viewing the elderly as "disposable humans."

We're authorized by the U.S. Constitution to act, and by the vote of our people and our states, both Republicans and Democrats. So I think we're going to be on firm ground. I think we'll prevail in these lawsuits that are more political statements than anything. So that we can protect our people.

And this is about life. And I have to tell you, I had a meeting with nurses today who are heroes, of course (on National Nurses' Day)...They were comparing some of the rhetoric we're hearing out from some Republican politicians that these are just kind of old folks. And that is so offensive to me, to think that people over the age of 60 are sort of disposable humans. Being 69, I certainly don't appreciate that.

There was a nurse who was about 65 who didn't appreciate it. And look, the people -- these are losses of living people. When we lose a brother or a parent or a grandparent, it's a loss to the living. That's what's at stake here.

And I just really -- it boils my blood when I hear the comments from some of these Republican legislators that this is just a problem with folks at some age, so we shouldn't just worry about it. I can't stand that. That will not stand.

And we need to speak against it, call it out for what it is, which is inhumane selfishness. And make sure that we continue on this course, that the vast majority of people, at least in my state, believe is the right one.

("It is scary how quickly life got cheap in America," Cuomo added.)

Inslee said it is "very clear" that the "curve" will shoot back up if his state's economy reopens now.

"This beast is going to get off floor and bite us back. And this is just a biological certainty, And we have some legislators who have the "R" name after them and are paying more attention to that than the biology of this thing. And the thing that's maddening is that there's no dispute about this. This is just a biological fact."

Inslee blamed President Trump for disrupting the earlier "bipartisanship" in his state's approach to coronavirus:

"Frankly, when the president asks Americans to conduct illegal activity and ignore the clear orders of governors that were the law of their respective states, that was just kind of a signal to his colleagues thinking, this is how they're going to do battle, politically. And it's very, very unfortunate.

"Because I can tell you, the majority of Republicans in my state get what they're doing. They get it. They care about their loved ones as much as I do. They understand science."

Inslee said the Republican lawsuit is a "political statement" by a bunch of “elected folks.”

"The only motivation I can figure out is trying to follow this siren song from the president, who somehow believes that's in his political interest. As I've said, it's most unfortunate."

President Trump has said the hardest decision he ever made was the one to shut down the economy. Now he advocates opening it back up, taking precautions to prevent the spread of the virus.

Earlier this week, ABC's David Muir asked the president if he believes "that lives will be lost to reopen the country?"

"It's possible there will be some," Trump said, "because you won't be locked into an apartment or a house, or whatever it is. But at the same time, we're going to practice social distancing. We're going to be washing hands. We're going to be doing a lot of the things that we have learned to do over the last period of time.

Trump also has said that older and infirm people may want to continue their quarantines for now.