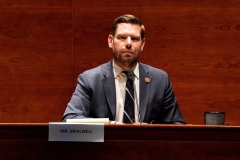 (CNSNews.com) - Democrats, by many accounts, are poised to lose seats in the upcoming midterm elections. And at least one congressional Democrat is suggesting it may be Russia's fault.

Rep. Eric Swalwell (D-Calif.) told CNN on Monday that the United States was a "combustible country" in 2016, when "Russia used disinformation, hacking and dumping, scanning of election systems. And they were quite effective in trying to help their preferred candidate, Donald Trump," Swalwell said.

"And then I look at the upcoming midterm election where we're even more combustible. We're coming off of an insurrection. We're helping Ukraine stay in the fight against Russia.

"So, not only have they had the capabilities -- they've always had that – we have become more combustible. And they have more of a motive, knowing what we're doing to them in Ukraine.

"And so, without going into the intelligence that I'm seeing, all of those factors make us very, very vulnerable to Russia trying to change the outcome of this upcoming election."

CNN's Victor Blackwell introduced Swalwell, a member of the intelligence committee, by saying, "There's growing fear among top national security officials that Russia may interfere in this year's midterm elections, according to new CNN reporting. One specific concern, the Kremlin will exploit the current divisions in America over election integrity to sow more doubt in the security of our voting systems."

Blackwell asked Swalwell, "how vulnerable are the elections systems, the computer systems of (local) election offices?"

"And the Russians know that...Now, when you layer on top of that, a Republican Party that refuses to accept the outcome of the last election -- the Texas Republican Party this weekend in their platform, they're trying to put in place that Joe Biden is not the winner.

"So if you can have the Russians go into the voting systems -- in New Mexico, you have a board there that is trying to throw out any Dominion system results in a recent election. Put on top of that, the Russians going into those systems, and you can create chaos in our elections.

"Now the response I hope the Russians are met with is that the Biden administration will call them out immediately.

"That was very effective in putting the coalition together in Europe, showing the exquisite intelligence we have, outing it before the Russians were able actually to act. So we call them out on that and stop them in their tracks.

“We have to learn from 2016, Victor. We didn't do that. We let the Russians hack and dump and launch a disinformation campaign. And we never called them out. And Donald Trump benefitted from that. This time, we have to go on offense and put the Russians on their heels."