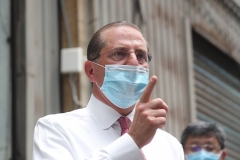 He spoke after Dr. Michael Osterholm, an infectious disease expert at the University of Minnesota and a member of Joe Biden's COVID advisory board, said a four- to six-week lockdown is necessary to control the spread of the pandemic in this country.

But I do think we should be driven by science and data and the facts here. And they simply do not support the notion of locking down the country, sheltering in place.

What we're seeing is the cause of this right now -- here and in Europe is -- it's indoor gatherings as we've gotten cold weather. We go in our houses with friends and neighbors, and we're not protecting ourselves by watching our distance and wearing our face coverings or getting into, other indoor settings where we're not doing those things. That's what's driving this.

Azar and many other health experts say the advent of colder weather and holiday gatherings are accelerating the spread of infection:

"And the more people you have over, the more you're at risk, OK?" Azar said.  "If you have more people together that are not household numbers, you're getting at risk and you got to be extra careful then about distance and wearing face coverings.

"But we've got real practical suggestions. Open your window if you can to increase ventilation. If you've got a ceiling fan, turn it so that it points upwards so it vents upwards. Use single-serving things for the food.

Azar said it remains true that the elderly and those who have co-morbid conditions are most likely to be hospitalized and die.

"The rate of mortality of those under the age of 70 is less than 1 percent, and as you get lower, it becomes quite rare. We don't want to see anyone die though.

"What's important though is, if you're 18 years old and you're carrying this disease, you can give it to that grandfather, that great grandmother at a household gathering, and how tragic that would be. You wouldn't want that in your conscience. So, we ask people, please be careful."

Dr. Osterholm, on the other hand, told Yahoo Finance on Wednesday that the country should lock down for four to six weeks, and pay for people's lost wages by "borrowing" from Americans' personal savings.

When you look at the personal savings rate in this country, it's now gone from about 8 percent to over 22 percent, we have a big pool of money out there that we could borrow at the historic low interest rates by the federal government, we could pay for a package right now to cover all of the wages -- lost wages for individual workers, for our losses to small companies, to medium-sized companies or cities, states, county governments. We could do all of that.

The U.S. personal saving rate is the percentage of your income left after you pay taxes and spend money.