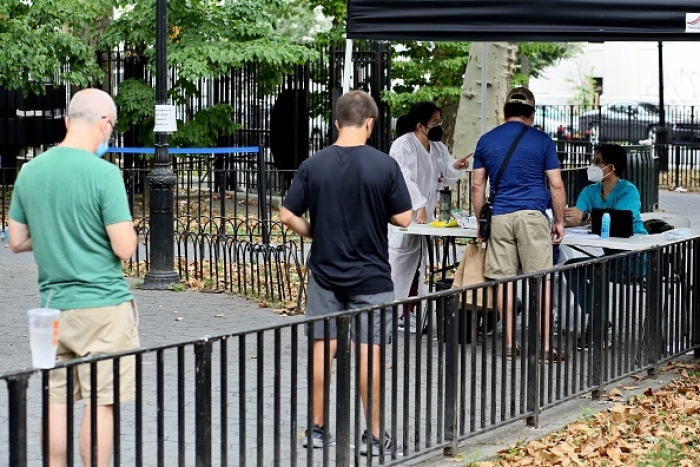 Men wait in line to register for a monkeypox vaccination on July 29, 2022 in New York City. (Photo by John Smith/VIEWpress)

(CNSNews.com) - The word 'gay' was mentioned just once Tuesday in a press briefing by the White House Monkeypox Response Team and public health officials, but the fact remains, the disease so far affects mostly homosexual men.

One of the public health officials who spoke on Tuesday, Health and Human Services Secretary Xavier Becerra, told the news conference, "Every American should take monkeypox seriously, and every American must do their part to help us beat back monkeypox."

But most Americans are unlikely to be at risk for the viral illness that so far affects mainly men who have sex with other men.

Becerra noted that the first case of monkeypox was reported in the U.S. on May 18: "Today, we have some 8,900 cases that have been reported." Becerra hailed the Biden administration effort to "ship out vaccines to the various states that were asking for help.

"Today we’ve made more than 1.1 million vaccine doses available throughout the country," Becerra said, "and we’ve delivered more than 620,000 of those doses.  We’ve also deployed more than 15,000 courses of the TPOXX treatment and have increased the country’s capacity to administer tests on a weekly basis to some 80,000."

"I’ve exercised my authority under Section 564 of the Food, Drug, and Cosmetic Act to allow the FDA to take further measures to safely increase the availability of vaccines to prevent monkeypox."

While the Biden administration avoids mention of men having sex with men, WHO does not:

"Although I am declaring a public health emergency of international concern, for the moment this is an outbreak that is concentrated among men who have sex with men, especially those with multiple sexual partners," WHO Director-General Tedros Adhanom Ghebreyesus said on July 23.

"That means that this is an outbreak that can be stopped with the right strategies in the right groups."

At Tuesday's news conference, only one medical professional discussed the population most affected by the disease:

"Just one additional thing to add is that, historically, the population that is being over-represented in this outbreak — gay, bisexual, other men who have sex with men — in recent history have demonstrated significant confidence in vaccine with COVID vaccination rates that are well over 90 percent," said Dr. Demetre Daskalakis, Deputy Coordinator of the White House Monkeypox Response.

"I think that the due diligence done by the FDA looking into the data should assure them that the vaccine is immunologically equivalent and safe.

"So just given the history, I imagine that just being clear with that and making sure that our local departments of health message this correctly — I think we’re going to see that we will likely still run out of vaccines before we run out of arms."

In response to a question on Tuesday, CDC Director Rochelle Walensky noted that the CDC has "guidance that sort of decreases your risk, and decreasing your risk occurs both with vaccination as well as decreasing your number of sexual partners. Of course, we want to give people choices and to give them the most information possible as they are making informed decisions about their own sexual health."

"Monkeypox can more accurately be described as 'sexually transmissible.' In other words, sex is just one of the ways that monkeypox can be spread. In the past, monkeypox outbreaks have been linked to direct exposure to infected animals and animal products, with limited person-to-person spread.

"In the current monkeypox outbreak, the virus is spreading primarily through close personal contact. This may include contact with infectious lesions or respiratory secretions via close, sustained skin-to-skin contact that occurs during sex. However, any close, sustained skin-to-skin contact with someone who has monkeypox can spread the virus. The contact does not have to be exclusively intimate or sexual."

Monkeypox is characterized by a rash that can look like pimples or blisters that appears on the face, inside the mouth, and on other parts of the body, like the hands, feet, chest, genitals, or anus, CDC says. 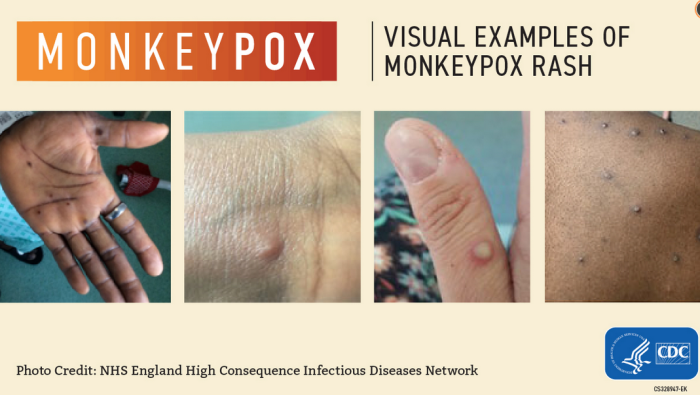