HHS Secretary: COVID Vaccine May Be Available for Vulnerable People 'Within Days' 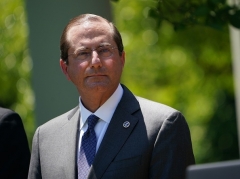 (CNSNews.com) - Both Pfizer and Moderna have now requested emergency FDA approval of their COVID vaccine candidates, and by mid-December, the most vulnerable people may be rolling up their sleeves for shots, Health and Human Services Secretary Alex Azar told Fox News Monday morning:

So Pfizer submitted their application a week ago. And the FDA said they'll hold a public advisory committee hearing on December 10th. And if everything is on track, FDA could approve within days of that hearing.

And then Moderna, they filed today, and there'll be an advisory committee for them likely December 17th is what the company has announced. And again, it could be within days of that public advisory committee that FDA grants approval if the data all confirms the way it's looking. And the Moderna data today -- incredible. Thirty-thousand people in that clinical trial, and they just released their full results -- 94 percent effective. It's unbelievable.

The looming question now becomes, who gets the vaccine first, since there won't be enough vaccine or enough time to give every American a shot as soon as they're available:

"I wish we had 330 million doses on day one, upon approval," Azar said.

"But even with the incredible work of President Trump and Operation Warp Speed and starting manufacturing in the early days of these programs, we're going to have maybe 40 million doses of vaccine by the end of this year and then keep producing -- all these different vaccines -- and keep producing over the course of months.

"So we want to make sure those first vaccines, the first weeks, go to those most vulnerable -- those with the biggest impact on saving lives and also protecting those who are most at risk like front-line health care workers taking care of COVID patients."

Azar said it will be up to nursing homes, hospitals, and pharmacies to dispense the vaccines:

"It really could be within days of FDA approval we'll start seeing vaccines in people's arms, which is really incredible.

"Think of this -- ten months into this pandemic hitting our shores, thanks to what President Trump has done here, we believe we're going to have millions of people getting vaccinated before Christmas this year. It's just unheard of in the history of public health, this accomplishment."

Admiral Brett Giroir, the assistant HHS secretary, told CNN's "State of the Union" on Sunday that the goal of health officials is to "immunize for impact."

The surgeon general and myself and all the team are really out trying to educate the public. We have to see what the data show, but all indications are this is an extremely safe vaccine, the Pfizer vaccine and Moderna, and very, very effective, over 95 percent effective.

And, remember, if we can immunize for impact -- that is, immunize those groups that are at the highest risk, like long-term care facilities, the elderly, minorities, we can absolutely get 80 percent of the benefit of the vaccine by only immunizing a few percent of the population.

And that is what we really need to do this month, when we are going to have -- you know, we should have enough vaccine by the end of the year to immunize 20 million Americans. And we have to immunize for impact.

The rest of the America will get it in the second quarter, third quarter of 2021, but we could maximize our impact right now.

"This puts the end to the pandemic. This is the way we get out of the pandemic. The light is at the end of the tunnel. But the American people have to do the right things until we get that vaccine widely distributed -- wear a mask, avoid indoor crowded spaces, all the things you know."