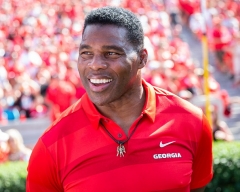 (CNSNews.com) - Former pro-football running back Herschel Walker told a House Judiciary subcommittee on Wednesday he opposes reparations for slavery on a number of grounds, including his religion.

"My approach is biblical," Walker said in his opening statement.

"How can I ask my heavenly Father to forgive me, if I can't forgive my brother? I never want to put any one religion down, but my religion teaches togetherness, reparation teaches separation."

Walker said America is a “melting pot” and “the greatest country in the world to me."

He raised several points about reparations, including:

-- "Where will the money come from? Does it come from all the other races except the black taxpayers?"

-- Some Americans' ancestors came to this country 80 years ago. They weren't even here during slavery.

-- "Some states didn't even have slavery."

Walker said he discussed reparations with his mother, and she asked, "Who is the money going to go to?" She also wondered, "Has anyone thought about paying these families who lost someone in the Civil War who fought for (slaves') freedom?"

"It continues to let us know we're still African-Americans, rather than just Americans,” he said.

The bill seeks to “address the fundamental injustice, cruelty, brutality, and inhumanity of slavery in the United States and the 13 American colonies between 1619 and 1865 and to establish a commission to study and consider a national apology and proposal for reparations for the institution of slavery, its subsequent de jure and de facto racial and economic discrimination against African-Americans, and the impact of these forces on living African-Americans, to make recommendations to the Congress on appropriate remedies, and for other purposes.”