'Guys Like Me': Biden Finds Common Ground With Black Victims of White Supremacists 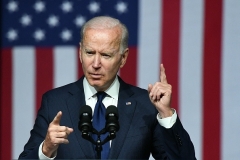 President Joe Biden commemorates the 100th anniversary of the Tulsa Race Massacre at the Greenwood Cultural Center in Tulsa, Oklahoma, on June 1, 2021. (Photo by MANDEL NGAN/AFP via Getty Images)

(CNSNews.com) - President Joe Biden said he went to Tulsa on Tuesday "to shine a light, to make sure America knows the story" of a white mob viciously attacking a successful black community one hundred years ago.

Biden told the story in great, gory detail -- how "one night changed everything -- everything changed."

And at one point, Biden aligned himself with the victims of racial hatred:

"Most people didn't realize that a century ago, the Klan was founded just six years before the horrific destruction here in Tulsa," Biden said:

And one of the reasons why it was founded was because of guys like me, who are Catholic. It wasn't about African Americans then. It was about making sure that all those Polish and Irish and Italian and Eastern European Catholics who came to the United States after World War I would not pollute Christianity.

The flames from those burning crosses torched every reason--region of the country. Millions of white Americans belonged to the Klan. And they weren't even embarrassed by it. They were proud of it. And that hate became embedded systematically and systemically in our laws and our culture.

We do ourselves no favors by pretending none of this ever happened or doesn't impact us today because it does still impact us today. We can't just choose to learn what we want to know and not what we should know.

We should know the good, the bad, everything. That's what great nations do. They come to terms with their dark sides. And we're a great nation. The only way to build a common ground is to truly repair and to rebuild.

I come here to help fill the silence, because in silence, wounds deepen. And only--as painful as it is, only in remembrance do wounds heal. We just have to choose to remember We memorialize what happened here in Tulsa so it can be--so it can't be erased.

We know here in this hallowed place, we simply can't bury pain and trauma forever. And at some point, there'll be a reckoning, an inflection point like we're facing right now as a nation.

What many people hadn't seen before or simply refused to see cannot be ignored any longer. You see it in so many places. There's a greater recognition that for too long, we've allowed a narrowed, cramped view of the promise of this nation to fester. A view that America is a zero sum game where there's only one winner...

'This was a massacre'

Biden talked a lot about "hate," using the word at least ten times in his speech, as he reopened very old wounds:

One hundred years ago in Tulsa, he said, "There was enough hate, resentments and vengeance in the community, enough people who believed that America does not belong to everyone and not everyone is created equal -- Native Americans, Asian Americans, Hispanic Americans, black Americans, a belief enforced by law, by badge, by hood, and by noose that speaks to that, lit the fuse."

The fuse of fury was an innocent interaction that turned into...a terrible, terrible headline -- allegation of a black male, a teenager, attacking a white female teenager. A white mob of a thousand gathered around the courthouse where the black teenager was being held, ready to do what still occurred, lynch that young man that night.

But 75 black men, including black veterans, arrived to stand guard. Words were exchanged, then a scuffle, then a [sic] shots fired. Hell was unleashed. Literal hell was unleashed. Through the night and into the morning, the mob terrorized Greenwood.

Torches and guns, shooting at will. A mob tied a black man by the waist to the back of their truck with his head banging along the pavement as they drove off. A murdered black family draped over the fence of their home outside.

An elderly couple knelt by their bed praying to God with their heart and their soul when they were shot in the back of their heads. Private planes. Private planes dropping explosives. The first and only domestic areal assault of its kind on an American city here in Tulsa. Eight of Greenwood's nearly two dozen churches burned like might--Mount Zion across the street at Vernon AME. Mother Randle said it was like a war. Mother Fletcher says all these years later, she still sees black bodies around.

The Greenwood newspaper publisher A.J. Smitherton--excuse me, Smitherman penned a poem of what he heard and felt that night. And here's the poem. He said, "Kill them. Burn them. Set the pace. Teach them how to keep their place. ...Reign of murder, theft, and plunder was the order of the night." That's what he remembers in the poem that he wrote.

One hundred years ago at this hour on this first day of June, smoke darkened the Tulsa sky rising from 35 blocks of Greenwood that were left in ash and ember raised in rubble. Less than 24 hours, in less than 24 hours, 1,100 black homes and businesses were lost. Insurance companies, they had insurance, many of them, rejected claims of damage. 10,000 people were left destitute and homeless, placed in internment camps.

As I was told today, they were told, don't you mention you were ever in a camp or we'll come and get you. That's what the survivors told me. Yet, no one--no arrests of the mob were made. None. No proper accounting of the dead. The death toll records by local officials said there were 36 people. That's all. 36 people.

Based on studies, records, and accounts, the likelihood--the likely number is much more in the multiple of hundreds. Untold bodies dumped into mass graves. Families who, at the time, waited for hours and days to know the fate of their loved ones are now descendants who have gone 100 years without closure.

But you know, as we speak, the process--the process of exhuming the unmarked graves has started. And at this moment, I like to pause for a moment of silence for the fathers and mothers or sisters sons and daughters, friends of God and Greenwood. They deserve the dignity and they deserve our respect. May their souls rest in peace. My fellow Americans this was not a riot. This was a massacre...