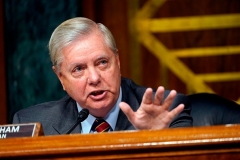 (CNSNews.com) - Sen. Lindsey Graham (R-S.C.) is being attacked by Democrats, including partisans in the media, for calling Georgia Secretary of State Brad Raffensperger to inquire about signature-matching on mailed ballots.

"Voting by mail will be the end of the Republican Party if we don't have a system to verify signatures," Graham told Fox News's Sean Hannity Tuesday night. "All I'm asking for is that Georgia have a bipartisan group to verify a signature on a mailed ballot, not leave it up to a single individual."

Secretary of State Brad Raffensperger told CNN on Monday that Graham "asked if the ballots could be matched back to the voters. And then he -- I got the sense it implied that then you could throw those out...So that's the impression that I got."

Raffensperger did not say that Graham asked him to throw out legally cast ballots: "Well, it's just an implication -- look hard and see how many ballots you could throw out."

But Democrats and their media allies continue to report that Raffensperger accused Graham of trying to get him to throw out legal ballots. (MSNBC's "Morning Joe" on Wednesday pondered, "Could that be considered a crime?")

Graham told Hannity he did no such thing:

I called the secretary of state to have him explain to me how you verify a signature on a mail-in ballot, not to throw out legal votes, but to make sure we have a system in Georgia that can verify that you are who you say you are when you vote.

If you show up in person, you need an ID. You don't need an ID when you vote by mail. If you go through the portal, you need an ID, but when you apply for a mail-in ballot through the mail they have to verify a signature. A single person does that in every county election office. It should be bipartisan.

Here's what I'm begging the Trump administration to do -- campaign to do. Challenge, get some judge to go look at the envelopes with signatures and match them against the database with somebody that knows what the hell they're doing, in front of Republicans and Democrats so we can verify that mail-in voting in Georgia is not fraudulent. When you have a single person verifying the signature, it's not bipartisan. I think that's not the way to do it. That's what I was talking about.

Stacy Abrams is calling for every liberal in the country to move to Georgia. She's bragging about having 600,000 people ready to vote by mail. What I'm begging Georgia to do is make sure that if somebody votes by mail, you have a bipartisan process to verify the signature -- we don't just leave it up to one person in the election office.

Raffensperger told CNN on Monday that Georgia requires signature matching when an absentee ballot is requested; and the ballot is signature-matched when it is returned. "And then with our new online absentee ballot portal, that has voter ID. So we feel very confident that the election officials have done their job."

Graham is not persuaded of that:

All I can say, as I sit on your show, that voting by mail will be the end of the Republican Party if we don't have a system to verify signatures. All I'm asking for is that Georgia have a bipartisan group to verify a signature on a mailed ballot, not leave it up to a single individual.

Here's what I predict: If you had an audit of all these signatures on envelopes in Georgia, and you had people that know what they are doing, I bet you the rejection rate would be more than 0.3 percent.

So if we don't get a better system when it comes to voting by mail, that's the end of the Republican Party. And let it start in Georgia, folks.  Stacy Abrams is trying to take over the election system in Georgia. Fight back.