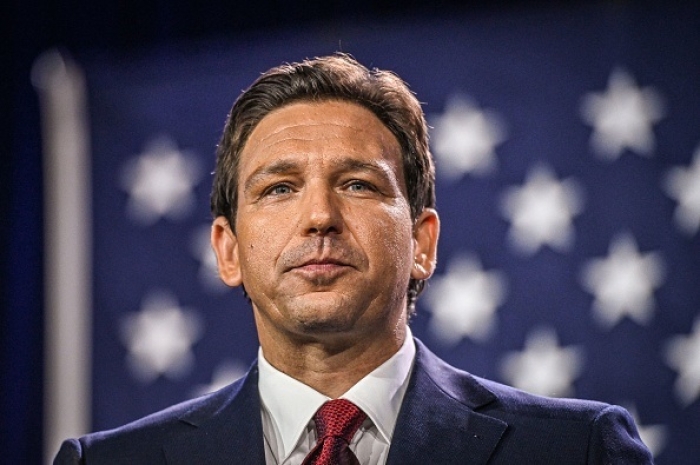 (CNSNews.com) - President Biden hasn't said anything publicly about the ongoing protests in China against the Communist regime's harsh COVID lockdowns. But Florida's Republican Gov. Ron DeSantis, a potential presidential contender, made it clear on Tuesday where he stands on that foreign policy issue.

At a news conference in Jacksonville, where he announced a new state railway project, DeSantis began his remarks this way:

“Before we do today's announcement, I just want to make a comment about what we've seen going on in China," he said:

"This Zero-COVID policy is draconian. It violates people’s liberties and it is completely unscientific. And the people of China are right to be able to speak out and protest against what the Chinese Communist Party is doing. This CCP has a maniacal desire to exert total control over its population.

“Zero-COVID is really just the pretext for them to do what they want to do anyways. And that is not a model that can work over the long term. The people in China are finally speaking out against it. And I just think we need these draconian COVID policies to go to the ash heap of history where they belong.”

DeSantis also expressed concern about reports that Apple may remove Twitter from its App Store, while at the same time Apple is not allowing Chinese protesters to get their message out.

The Biden administration's response to China's crackdown on protesters has been tepid. Biden has not issued a statement on that topic.

But White House Press Secretary Karine Jean-Pierre said on Tuesday, “we’ve been very clear people have a right to protest without fear.”

And national security spokesman John Kirby also noted this week that people in China "have concerns" about the regime's zero-COVID policies, "and they’re protesting that, and we believe they should be able to do that peacefully.”

On Tuesday night, Fox News's Tucker Carlson asked DeSantis why he commented on the Chinese protests and Apple's apparent effort to aid the Chinese Communists in suppressing protesters' voices:

"Well, Tucker, if you look what's going on in China now, the CCP, they've been imposing these zero COVID lockdown policies. They've been doing it on and off for three years. And you have people in China that are really engaged in a noble effort to protest (what) is basically Leninist rule.

"So what is Apple doing with that? They are limiting the air drop function [transferring files between phones] of the protesters. So they are serving, basically as a vassal, to the Chinese Communist Party.

“Then, on the other hand, here in the United States, what are they doing? They are trying to get Elon Musk’s Twitter off the App Store, potentially, which would be a huge blow for free speech.

DeSantis said the states must do whatever they can to "protect people's rights to engage in free expression." But he said Congress also needs to consider passing antitrust laws for huge tech companies, which "are exercising massive amounts of power over our society."

DeSantis, just re-elected for a second term as governor, has brushed aside questions about making a run for president, but if he's talking about China and free speech, it may be a hint.