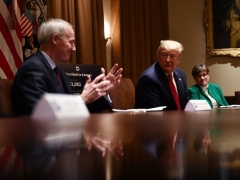 Then-President Donald Trump meets with Arkansas Governor Asa Hutchinson on May 20, 2020, in the Cabinet Room of the White House. (Photo by BRENDAN SMIALOWSKI/AFP via Getty Images)

(CNSNews.com) - After his turbulent presidency, Donald Trump is now just one of "many voices" in the Republican Party, Arkansas Gov. Asa Hutchinson told CNN's "State of the Union" on Sunday.

Host Dana Bash asked Hutchinson, "Has Trump succeeded in taking down the Republican Party as you know it?"

And that's one of the reasons that my voice is important, others' voice is important in this debate. And I think it's fine for CPAC to invite former President Trump to speak, but how about the other voices -- Senator Cassidy from Louisiana, those that have different points of view, still arch-conservatives, but a different voice for the future of our party?

And so that's what we have got to embrace. He has a loud megaphone, but we have to have many different voices. And, in my view, we can't let him define us for the future, because that would just further divide our country. And it would hurt our Republican Party.

Hutchinson said he would not support Trump for re-election in 2024.

And, again, he should not define our future. We have got to define it for ourself. And that has to be based upon the principles that really gave us the strength in America.

There's one that we have to reach out to, but it's based upon conservative principles and reaching out to those blue-collar voters that are so important that identified with him because he was fighting for them. And we have got to take that message, but we just got to handle it in a different way with different personalities.

Hutchinson is vice chair of the National Governors Association.