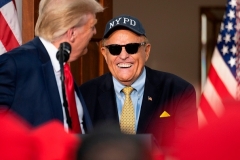 You have to, Stuart. You know, we have to take Hillary at her word when she said to Biden, and rather ominously, 'do not concede under any circumstances.' Under any circumstances is a pretty broad thing. He could be winning by 10 percent, and they're going to contest it.

So, we will only know that night. Why not assume the worst? Then maybe we will be pleasantly surprised. So, we will be ready with a large, large number of lawyers in different states.

Jay Sekulow and I will be in charge of it. We're the two who defended him on the impeachment. And there will be many, many fine lawyers in charge of it in different states, but we want to make sure it's coordinated correctly.

Hunter Biden introduced his father, then-Vice President Joe Biden, to a top executive at a Ukrainian energy firm less than a year before the elder Biden pressured government officials in Ukraine into firing a prosecutor who was investigating the company, according to emails obtained by The Post.

The never-before-revealed meeting is mentioned in a message of appreciation that Vadym Pozharskyi, an adviser to the board of Burisma, allegedly sent Hunter Biden on April 17, 2015, about a year after Hunter joined the Burisma board at a reported salary of up to $50,000 a month.

“Dear Hunter, thank you for inviting me to DC and giving an opportunity to meet your father and spent [sic] some time together. It’s realty [sic] an honor and pleasure,” the email reads.

An earlier email from May 2014 also shows Pozharskyi, reportedly Burisma’s No. 3 exec, asking Hunter for “advice on how you could use your influence” on the company’s behalf.

The blockbuster correspondence — which flies in the face of Joe Biden’s claim that he’s “never spoken to my son about his overseas business dealings” — is contained in a massive trove of data recovered from a laptop computer.

Giuliani told Varney, "it's probably the biggest, highest-level scandal so far this century," and Giuliani said there's more to come:

"[I]t's going to move on to China and Iraq, where similar things happened. And in China, there was much more money involved, much more. The Biden family has for five years been business partners, either with the Chinese government or with high-level members of the Chinese Communist Party. Beyond being bribed, they have enormous implications for our national security.

"The question is, why did no one in the Obama administration pick this up, if they were watching out for our national security? ...Everything I'm telling you is in texts, e-mails," Giuliani said.

"This will all come out, Stu. It's all there," Giuliani said.