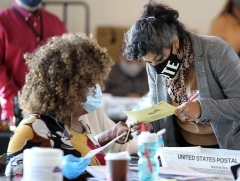 (CNSNews.com) - Georgia's Republican Governor Brian Kemp got some backup from his Republican lieutenant-governor on Tuesday, as President Trump fumed about the "hapless governor of Georgia" refusing to involve himself in post-election disputes.

Lt.-Gov. Geoff Duncan told CNN's Alisyn Camerota, "it's an honor" to work with Gov. Kemp and Secretary of State Brad Raffensperger. "Just because the person we voted for, us three, didn't win the election here in Georgia doesn't change our job description."

Duncan said their job "is to make sure we finalize the election process here."

He noted that the final recount, requested by President Trump, should be completed by midnight Tuesday. "All accounts are that we're on track to certify the same results and continue to investigate any sort of issues of fraud."

As it stands now, Biden appears to have won Georgia by around 12,600 votes.

Duncan on Tuesday urged President Trump and his supporters to "redirect their post-election approach" and to stop spreading "misinformation."

-- Why won't Governor @BrianKempGA, the hapless Governor of Georgia, use his emergency powers, which can be easily done, to overrule his obstinate Secretary of State, and do a match of signatures on envelopes. It will be a “goldmine” of fraud, and we will easily WIN the state.

Georgia law prohibits the governor from interfering in elections. The Secretary of State, who is an elected constitutional officer, has oversight over elections that cannot be overridden by executive order. As the governor has said repeatedly, he will continue to follow the law and encourage the Secretary of State to take reasonable steps — including a sample audit of signatures — to restore trust and address serious issues that have been raised.

On Tuesday, Lt.-Gov. Duncan told CNN he's alarmed by "the amount of misinformation that continues to flow":

It's certainly disheartening to watch folks willing to kind of put their character and their morals out there just so that they can spread a half truth or a lie in the efforts to maybe flip an election. And certainly, that's not what democracy's all about.

You know, I would urge the President, I would urge Republicans to redirect their post-election approach here. We both have short-term and long-term challenges if we don't.

I mean, short term, we run the risk of alienating voters for our Senate race that is coming upon us for Senator Loeffler and Senator Perdue. And we need them. As a Republican, I want them in that Senate.

And long term, I think we hurt the brand of our Republican Party, which is certainly bigger than one person long term.

And we've got an opportunity to learn from some important lessons here. I think as a Republican, I've learned that an outsider, a change agent, can be effective in D.C., but I've also learned that communicating is important. I think we want to see, as Americans, we need to see leaders that inspire us and not talk down. I think that's a lesson as Republicans we can learn.

I think we can also learn to tackle some of the big issues, like immigration, like health care, and not just talk about the things we don't like, but really put some big plans on the table moving forward. Lessons to be learned.

Duncan said "highly educated folks that I know" are sending him screen shots of "misinformation" being spread by social media -- information that can easily be debunked, he said.

"On January 20th, when President-Elect Biden is sworn in, this is going to still be America, this is still going to be a great place to raise your family and run your business. And certainly, I'm going to fight hard for my conservative Republican policies over the next four years."

Duncan said he hopes Trump's complaints about alleged Georgia election fraud do not suppress the Republican vote for the Jan. 5 runoff race that will determine which party controls the U.S. Senate:

"I'm working hard to make sure that both Senator Loeffler and Senator Perdue get to represent our values here in Georgia, and obviously because of the scenario, represent the Republican values for our country in the Senate.

He encouraged both senators to "stay focused on the task at hand, winning the election, not getting wrapped up in any sort of election fraud or any of that. Their election is way too important for this country."

Duncan noted, “We're almost a month into this and we have yet to see any sort of systemic fraud, any sort of organized effort around fraud. And you know, I'm proud of that.

“As the lieutenant governor of Georgia, I'm proud to not sit here and have to report that the election was, you know, full of fraud. I'm proud of that. And certainly the person I voted for didn't win, but that doesn't disrupt my job description.”

Duncan indicated that neither he nor Gov. Kemp will join President Trump when he comes to Georgia on Saturday to campaign for Loeffler and Perdue.