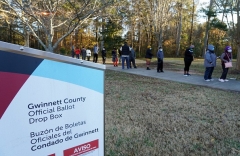 Voters stand in line to cast their ballots during the first day of early voting in the US Senate runoffs on December 14, 2020, in Atlanta, Georgia. (Photo by TAMI CHAPPELL/AFP via Getty Images)

(CNSNews.com) - Georgia's Republican Secretary of State Brad Raffensperger, now running for re-election, defended his state's election integrity laws on Sunday, ahead of a visit on Tuesday by President Joe Biden and Vice President Kamala Harris, who will be making a push for Democrat voting legislation this week.

Democrats point to Georgia as a state that supposedly "suppresses" the right to vote, but Raffensperger rejected that argument: "I think that we have shown that Georgia has fair and honest elections," he told CBS's "Face the Nation" on Sunday.

"We have record registrations. We have record turnout. Anyone that wants to vote in Georgia has tremendous opportunities to vote early, vote with no excuse absentee voting, with photo ID, and then also show up on Election Day. And I'll compare our record against other states."

Raffensperger said if Democrats want to set federal rules for state-run elections, they should pass laws banning ballot harvesting and requiring voter I.D., both of which Georgia has done:

"[T]hat's one thing that I do think we need is to make sure that nationwide there should be a law that bans, you know, ballot harvesting. I don't think that ballot harvesting is good. The only person that should touch your ballot is you and the election official. So I think that's one solid, election reform measure.

(Host Margaret Brennan cut in, saying, "Only U.S. citizens do currently vote in elections, but go on.")

"But we don't have a constitutional amendment," Raffensperger said.

"Now you see cities are trying to push non-citizen voting. And I believe that only American citizens should be voting in our elections. And that's supported by a wide variety --a wide majority of all Americans, just like photo ID is supported by all demographic groups and a majority of both political parties.

"And that's what they've been using in Minnesota for over 11 years for their absentee balloting. So that's another, you know, solid, common sense federal reform measure, if they really want to get series about election reform."

Democrats, with their "Build Back Better" social agenda stalled in the Senate, are now aggressively pushing two voting bills: T

he John Lewis Voting Rights Act would require some states and political subdivisions to obtain preclearance before changes to voting rules could take effect. The Department of Justice or the U.S. District Court for the District of Columbia would decide if states could change their voting laws.

The second bill, The Freedom to Vote Act, sponsored by Minnesota Democrat Sen. Amy Klobuchar, would set federal voting requirements for all the states to follow. States that currently require voter ID would have to accept a wide range of documents, including those without photos, such as utility bills. The bill would make election day a federal holiday, allow ex-convicts to vote, and allow all eligible voters to vote by mail, among other measures intended to relax state rules.

Raffensperger said photo ID "is the most secure way of using and making sure that you can identify who the voter is. And I think that's very important.

“And then they also want same-day registration. And that's just -- you know, very difficult for any election official to manage. And I think that undermines trust in elections. And right now we need to restore trust wherever we can.

"In Georgia, we've been fighting this theme of, you know, stolen election claims from Stacey Abrams, about voter suppression, and in 2020 it was about voter fraud. Both of them undermine voter trust."

Democrats are using the events of January 6, 2021 as a reason to pass their voting legislation. Former President Donald Trump continues to insist that the 2020 election was "rigged." Raffensperger, in fact, was the Georgia election official who refused Trump's demand to "find 11,780 votes."

"Well, January 6th was terrible," Raffensperger told CBS, "but the response doesn't need to be eliminating photo ID and then having same-day registration. And if you don't have the appropriate guardrails in place, then you're not going to have voter confidence in the results.

"In Georgia, we've actually increased the number of days of early voting. We have more early voting now than New York, New Jersey, and Delaware."

Referring to Trump, Raffensperger said, "[W]hen people lose races, I think the proper thing to do is admit that you lose. And if you want to run again, by all means do so."