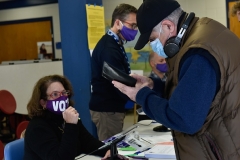 Voters go to the polls in Georgia on January 5, 2021. (Photo by VIRGINIE KIPPELEN/AFP via Getty Images)

(CNSNews.com) - Georgia's Republican Gov. Brian Kemp says far from suppressing the vote, the bill he just signed "is expanding the opportunity for people to vote early here in Georgia, again, with even additional potential for people to vote on Saturday and Sunday.

"It's further securing the absentee ballot process by simply adding a photo ID requirement or number from your ID that will actually speed up the absentee balloting by mail process, which was very slow after this last election. Take the arbitrary part of that away.

"So really, it's an election integrity bill but also expands access. So, it's kind of ironic that the president would be against that," Kemp told Fox News on Saturday.

President Joe Biden called the bill "sick" at his news conference last Thursday -- a throwback to the Jim Crow era. Then on Friday, speaking to reporters before heading home to Delaware again, Biden called the Georgia bill, now law, an "atrocity."

"The idea -- if you want any indication that it has nothing to do with fairness, nothing to do with decency -- they passed a law saying you can't provide water for people standing in line while they're waiting to vote. You don't need anything else to know that this is nothing but punitive, designed to keep people from voting. You can't provide water for people about to vote? Give me a break,” Biden said.

The no-water/no gifts provision that has outraged Biden and other leftist Democrats is intended to prevent vote-buying. But the bill clearly states that there's no prohibition on providing water "from an unattended receptacle." In other words, thirsty voters waiting in line can help themselves to water.

Here's how that section of the bill reads:

or participate in the giving of any money or gifts, including, but not limited to, food and drink, to an elector, nor shall any person solicit signatures for any petition, nor shall any

person, other than election officials discharging their duties, establish or set up any tables or booths on any day in which ballots are being cast:

(1) Within 150 feet of the outer edge of any building within which a polling place is established;

(2) Within any polling place; or

(3) Within 25 feet of any voter standing in line to vote at any polling place.

These restrictions shall not apply to conduct occurring in private offices or areas which cannot be seen or heard by such electors.

A footnote says, "This Code section shall not be construed to prohibit a poll officer from distributing materials, as required by law, which are necessary for the purpose of instructing electors or from distributing materials prepared by the Secretary of State which are designed solely for the purpose of encouraging voter participation in the election being conducted or from making available self-service water from an unattended receptacle to an elector waiting in line to vote."

Gov. Kemp said if Biden or his handlers "actually compared Georgia voting laws to the State of Delaware, where he's from...we have a lot more opportunities for people to vote early here in the great state of Georgia than in Delaware, and perhaps people will compare those.”

As for charges that the new law is racist -- designed to suppress the black vote -- Kemp said:

I can truthfully look in the camera and ask my African-American friends and other African-Americans in Georgia to simply find out what's in the bill versus just the blank statement of this is Jim Crow or this is voter suppression or this is racist because it is not. It expands early voting in Georgia. It also further secures the ballot with a photo ID requirement.

And I would urge them to do just that and ask themselves who is being truthful to you here -- is it the governor and the legislature that just voted on this bill? Or is it a lot of these third-party groups that are making millions off of putting this false narrative out there or the president that obviously doesn't know what his own voting laws are in his own state?

Kemp noted that the bill requires two Saturdays for voting in an election; and counties can decide if they want to add two Sundays for voting.

The bill adds a photo ID requirement for absentee ballots. "We already have that requirement in our law when you go vote in person," Kemp said. "Before the last election, 95 percent -- average, 95 percent of the people voted in person, so people are used to using an ID to vote in Georgia so it's not a big deal like people are making it out. And if you don't have ID, we will give you one for free.

The left and the outrageous people that are making money off of this are claiming that we're taking away the potential to use a drop box. That was never in the law...It's never been in the state law in Georgia...We're just going to make sure it's a secure process and that those drop boxes are monitored.

And this whole ridiculous statement about water, you can get water if you're standing in line. Your county can provide a drink cooler for you to get water, but the real question is people that are outraged about that, they should be asking, why am I standing in line that long to start with?

This bill addresses that with the number of machines that should be at every precinct based on the percent of population that's going to be voting in that precinct to help speed up the election.

People should be outraged in these Democratic-run counties that they're having to stand in line for two or three hours here in the State of Georgia. That is not the norm around the state.

So, a lot of these things, there's no truth behind it. They're trying to just -- they just believe that if they say it long enough, people will believe it and they'll send them money.

I would encourage people to actually read the bill, find out what the facts are, and, thankfully, there's a lot of media outlets now that are putting some good information out about what is exactly in the bill and also comparing it to states like Delaware, Colorado, California and other Democratic-led states -- Hawaii -- that have much more restrictive laws on voting than Georgia does.