Gen. Milley: 'Small Contingent of US and NATO Advisers and Trainers Currently in Ukraine' 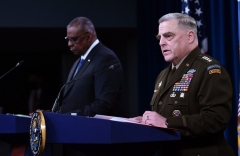 Chairman of the Joint Chiefs of Staff General Mark Milley and Defense Secretary Lloyd Austin speak at a Pentagon press conference on January 28, 2022. (Photo by NICHOLAS KAMM/AFP via Getty Images)

(CNSNews.com) - "We have no intention of putting American forces or NATO forces in Ukraine," President Biden said on January 25th. "But we — as I said, there are going to be serious economic consequences if he moves."

"If Russia chooses to invade Ukraine, it will not be cost-free, in terms of casualties or other significant effects," Milley told a press conference on Friday:

There is a small contingent of US and NATO advisers and trainers currently in Ukraine. The United States has zero offensive combat weapons systems, nor any permanent forces, nor bases in Ukraine.

Our role is limited in that we help train, advise and assist with tactics, techniques and procedures. We participate in institutional development of the Ukrainian Ministry of Defense.

As the secretary of defense has noted, we continue to provide military material support to Ukraine along with many other countries from NATO, and we are ready, capable and prepared to uphold our obligation under treaty to NATO, as mentioned by the secretary.

In addition to bordering Russia and Belarus and Moldova, Ukraine has a border with four NATO members: Poland, Slovakia, Hungary and Romania. The president and the secretary of defense have authorized the United States military to increase our readiness in the event we have to reinforce or assist our NATO allies.

War is not inevitable, as the secretary said. The right answer here is a diplomatic solution.

Last week, Defense Secretary Gen. Lloyd Austin put some 8,500 U.S. troops on "heightened alert," telling them to be ready for deployment, as Russia continued to bolster its forces near Ukraine’s border, apparently preparing for an invasion that could happen at any time, the Biden administration has warned.

Milley on Friday told reporters, "It's the policy of the United States government to continue to support an independent Ukraine and their goals, and we are continuing our effort to enhance their ability to protect themselves.

"We strongly encourage Russia to stand down and to pursue a resolution through diplomacy. Armed force should always be the last resort. Success here is through dialogue."

Speaking at the same news conference, Defense Secretary Austin said, "There is still time and space" for a diplomatic solution to the Russia-Ukraine crisis:

The United States, in lockstep with our allies and partners, has offered Russia a path away from crisis and toward greater security, and the Department of Defense will continue to support those diplomatic efforts.

That includes more security assistance to Ukraine in the past year, $650 million, than...at any previous time. And so in December, President Biden authorized $200 million in assistance, which included additional Javelins and other anti-armor weapons, grenade launchers, large quantities of artillery and small arms and munition and other equipment. Those deliveries are ongoing. Indeed, another shipment -- another shipment just arrived today.

And third, the United States will stand shoulder to shoulder with our NATO allies. That includes reinforcing security on NATO's eastern flank, and as you know, we've placed thousands of US troops on prepared to deploy orders earlier this week.

If NATO activates its response forces, these troops will be ready to go. Now, the situation on Ukraine's borders is changing rapidly, but as we look ahead, there are a couple of things that we can count on.

One, this department will continue to provide President Biden with options to defend our national security interests in response to Russian actions. And two, we will stay united with our NATO allies.