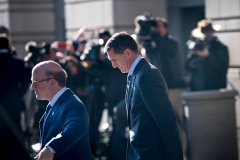 The note reads in part:

Powell, Flynn's most recent attorney, told Fox News's Sean Hannity Wednesday night, "The documents I've seen so far, in addition to the ones you have in your hands now, are even more stunning. It's just absolutely appalling what these agents and then the Special Counsel operation did to General Flynn. It's abuse of their authority at every turn."

Four days after President Donald Trump's inauguration, the FBI sent two agents (including Peter Strzok of text-message infamy) to the White House to speak to Flynn, who was then the National Security Director and was not told that the agents planned to interrogate him about his conversations with the Russian ambassador to the United States.

In both of those administrations there was process. And so if the FBI wanted to send agents into the White House itself to interview a senior official, you would work through the White House Counsel and there would be discussions, and approvals and it would be there. And I thought,  it's early enough, let's just send a couple of guys over.

Wallace asked Comey in that interview, "What did he (Flynn) think they were coming over they are for?"

Powell said on Wednesday the handwritten notes are "devastating evidence of the lengths they were willing to go to, to disregard all prior protocols, all prior rules, their standard practice in other cases...None of that applied to General Flynn... because they were determined to take him out."

I interpret the notes as absolutely damning of their conduct and their plan. They rejected the advice of the apparent lawyer who wrote the handwritten notes that they not play games with the White House, and instead, that's exactly what they did.

The author even expresses regrets about having agreed the previous day that Flynn not be shown any of the transcripts they had of his calls. Transcript is redacted, but I'm sure that's what they're saying there. Because they usually show the evidence to people when they're talking to them about it.

But no -- General Flynn, they blindsided completely at every turn. They schemed and planned ahead of the meeting to keep him relaxed and unguarded so that he would not even know he was the subject of the interview. I can't even tell you how outraged I am by all of this.

Flynn 'was unguarded'; 'Clearly saw the FBI agents as allies'

Then-Deputy FBI Director Andrew McCabe is the one who telephoned Flynn to set up the interview in Flynn's White House office.

According to a 2018 sentencing memo in Flynn's case:

At 12:35 p.m. on January 24, 2017, the first Tuesday after the presidential inauguration, General Flynn received a phone call from then-Deputy Director of the FBI, Andrew McCabe, on a secure phone in his office in the West Wing. General Flynn had for many years been accustomed to working in cooperation with the FBI on matters of national security. He and Mr. McCabe briefly discussed a security training session the FBI had recently conducted at the White House before Mr. McCabe, by his own account, stated that he “felt that we needed to have two of our agents sit down” with General Flynn to talk about his communications with Russian representatives.

Mr. McCabe’s account states: “I explained that I thought the quickest way to get this done was to have a conversation between [General Flynn] and the agents only. I further stated that if LTG Flynn wished to include anyone else in the meeting, like the White House Counsel for instance, that I would need to involve the Department of Justice. [General Flynn] stated that this would not be necessary and agreed to meet with the agents without any additional participants.”

Less than two hours later, at 2:15 p.m., FBI Deputy Assistant Director Peter Strzok and a second FBI agent arrived at the White House to interview General Flynn.23 By the agents’ account, General Flynn was “relaxed and jocular” and offered to give the agents “a little tour” of the area around his West Wing office. The agents did not provide General Flynn with a warning of the penalties for making a false statement under 18 U.S.C. § 1001 before, during, or after the interview.

Prior to the FBI’s interview of General Flynn, Mr. McCabe and other FBI officials “decided the agents would not warn Flynn that it was a crime to lie during an FBI interview because they wanted Flynn to be relaxed, and they were concerned that giving the warnings might adversely affect the rapport,” one of the agents reported.

Before the interview, FBI officials had also decided that, if “Flynn said he did not remember something they knew he said, they would use the exact words Flynn used...to try to refresh his recollection. If Flynn still would not confirm what he said...they would not confront him or talk him through it.” One of the agents reported that General Flynn was “unguarded” during the interview and “clearly saw the FBI agents as allies.”